A taste of the theatre this week 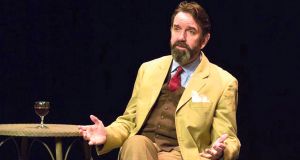 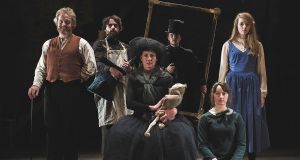 Alice in Wonderland: in this version, director Niall Henry pairs Alice with an older version of herself

Down and Out in Paris and London

Written in 1933, George Orwell’s Down and Out in Paris and London returns to the stage with a grim sense of timeliness. A man drifting through life, in early 1930s Paris, teaching English, finds himself slipping from comforts and discovering the view from below. With a keen understanding of social inequality and a wry sense of humour, he vividly recounts his experiences in Paris and around London, through characters from a darkly funny circus to the inhabitants of a Beckettian landscape. Debuted at the Dublin Fringe in 2014, Phelim Drew’s brisk one-man performance delivers most of Orwell’s memoir of his time in poverty, charting his breadline existence from pawnshops to work as a plongeur in frantic hotels, among his numerous dry and enduring observations of a demoralising day-to-day subsistence. In this way, poverty “annihilates the future”, says Orwell; you cannot think further than tomorrow. Eighty-four years on, though, those words can sound unbearably fresh.

Jocelyn Clarke’s 1999 adaptation of Lewis Carroll’s classic plunged Alice into an unsettling version of Wonderland – fleetly summoned by Blue Raincoat’s physically adept ensemble – while giving her a surprising accomplice: Carroll himself, or Charles Dodgson to use his real name. For this revival, though, director Niall Henry pairs Alice with an older version of herself instead, raising all kinds of conceptual ideas – from the self-reference of Blue Raincoat’s return journey to what seems like the older Alice’s corroded self-regard – but leaving us with two fairly indistinguishable Alices. As an agitated White Rabbit and a serene Chesire Cat, John Carty is more grounded, with Sandra O’Malley giving the Duchess and the Caterpillar a funereal solemnity. This is a story explicitly concerned with growth, though – whether by enchanted cakes, mushrooms or, more troublingly, time. It’s hard to say what Blue Raincoat discover by returning to Wonderland, unless it’s the realisation you never really leave.

An early success for the writer Christian O’Reilly, first produced by Druid Theatre Company in 2002, The Good Father is a sweet story of a mismatched couple who meet accidentally and get more than they bargain for. Tim, a working-class lad from a dysfunctional family, and Jane, a heartbroken posh woman, find each other at a drunken New Year’s party, and with a heedless rush of attraction and few precautions, she gets pregnant. Despite every sign to the contrary, and with some consideration of alternative options, they decide to have the child together. With that decision Tim gains a new momentum, determined to earn the tribute of the title, but Jane is mostly drifting along, and the chasm between them is not easily bridged. Now Rise Productions revisit the play, with Aonghus Óg McAnally directing Liam Heslin and Rachel O’Byrne in the expectant roles.

This is the Funeral of Your Life

An actor, a dancer and a mezzo soprano will come together in this show from Louise White to help you leave it all behind and consider what you’ve achieved in life, in what the producers are calling “a ceremony for the contemporary age”. We can only assume that means a bunch of millennials scootering in a circle around a pile of avocados to the sounds of trap music. We are intrigued nonetheless. Laurence Mackin