An unexpectedly funny and uplifting play about your own death

Review: This is the Funeral of your Life 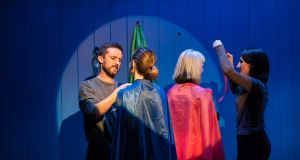 “We’re going to die.” It’s stark, true, and its iteration early on by Philip Connaghton generates nervous laughter. But moreso, the laughter is because of the humorous interplay between his persona – excitable and eager to get into the thick of death (as it were) – and that of fellow performer Lucy Miller, as she attempts to smooth and placate the audience and make the experience work.

On the face of it, this play is neither a cheery nor a funny prospect. It’s a theatre show that isn’t a comedy and sets out to curate a funeral. That it manages to be both funny and uplifting is an achievement. Director Louise White made this in response to the death and funeral of her father four years ago, a time both harrowing and life affirming, she writes in the programme.

It promises we can watch as they “facilitate your funeral in real time” in a live event featuring actor Miller, dancer Connaghton and deadpan mezzo soprano/keyboardist Michelle O’Rourke. The format is an exploration and commentary on how to do this, seeking to get the tone right, trying out O’Rourke’s various musical genres (“too churchy?”; “Too depressing?”) and styles for Connaghton’s enthusiastic dance of death.

Lian Bell’s setting is funeral home chic, and perfect. Sarah Jane Shiels’s lighting mirrors absence by continuing spots after an object or person has moved from the position. Yes, there is some crucial audience participation, though not obtrusively, and mostly for gentle comic effect.

Death is part of life, and in Ireland we’re supposed to be good at it, both in facing up to the physicality, and in surrounding the bereaved with support. It’s against the Irish way of death – the wake, music, endless sandwiches and gallons of tea, tedious practicalities that are a welcome distraction, and these days a eulogy – that this piece approaches the subject and seeks to create a shape into which we can project our own personal meaning.

We’re less good here at assessing where we are in life, acting accordingly, and engaging with the notion of personal legacy. So the most evocative gesture is asking the audience to contemplate where, on a ribbon representing our life, we are now.

This is elegant, dignified, skillfully put together by White and producer Joanna Crawley, and unexpectedly humorous. Perhaps the busy-ness is over-extended in spots, but that is true to the nature of funerals. And yes, they got the tone right.