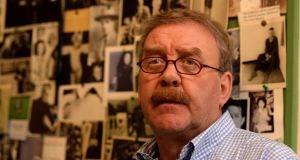 The National Women’s Council of Ireland (NWCI) has called for an independent investigation into the conduct and behaviour of Michael Colgan during his tenure at the Gate Theatre.

NWCI director Orla O’Connor told the Today with Seán O’Rourke show on RTÉ radio Mr Colgan’s dual mandate as a board member and chief executive during his time at the Gate was a “very unusual circumstance”.

Ms O’Connor also commended the bravery of Grace Dyas after the theatre director last week published an account of alleged sexual harassment by Mr Colgan during an encounter at a Dublin bar in 2016.

This was followed by claims of sexual harassment and bullying levelled against Mr Colgan by six other women which were published in Saturday’s Irish Times.

“It needs to be a body doing the investigation that is very independent of the [Gate] board because that’s certainly some of the concerns that the women are raising,” Ms O’Connor said.

She added: “Many of the people on the board will have been board members when Michael Colgan was also a board member; I can see why people might question the independence of that. We need to see a more fully fledged independent investigation, one that is not controlled by the Gate Theatre. There’s a wider investigation needed here than what the Gate are currently saying.”

On Friday, the Gate announced it would appoint an independent expert to deal with allegations of misconduct, and asked anyone affected to contact them confidentially by email.

In response, several of the woman who have made allegations against Mr Colgan, including two who spoke to The Irish Times on Saturday, questioned the independence of an investigation “that is funded and administered directly by the Gate” and said they would not be contacting the theatre.

Ms O’Connor also questioned procedures within the Gate Theatre for reporting allegations of sexual harassment prior to the public claims against Mr Colgan, and said employers need to take a “proactive stance” on the issue.

“We know that while legislation is there, legislation isn’t good enough. There needs to be a proactive stance taken within organisations that supports and encourages, and also have a zero-tolerance attitude to this kind of behaviour.”

She said while the laws exist to protect many people’s good name, they also allowed someone to abuse their power. “I’d love to see a change in that in our country.”

Meanwhile, the head of the Arts Council has encouraged actors who have experienced similar alleged abuse to “talk openly” about it.

“They need to be able to tell their stories. The genie is out of the bottle, they need to talk openly,” said Orlaith McBride, also speaking on RTÉ Radio.

Ms McBride pointed out the Arts Council was not a regulatory body. “We can only know what we know”.

She said all organisations that receive Arts Council funding had to confirm that they complied with all aspects of the Employment Equality Act.

Meanwhile, a Siptu trade union official has said that early in 2016, the union asked the Arts Council to include anti-bullying procedures as a requirement for funding, but that the Arts Council said such an issue did not fall under its remit.

Siptu arts officer Karen O’Loughlin told RTÉ’s News at One: “We went to the Arts Council with this early in 2016 to ask them to help us to deal with it, by connecting funding to robust anti-bullying procedures, and they refused. They said it wasn’t their business.

“It is an absolute prerequisite in my view that all of the funding bodies should insist that any organisation applying for funding or being supported with State money should have robust anti-bullying and anti-harassment, including anti-sexual-harassment, procedures in place.”

Ms O’Loughlin said it was an open secret in the arts that there was considerable bullying and sexual harassment within the sector.

She said that last year, the Irish Equity executive commissioned a study on the issue because there had been considerable discussion for some time at executive level about the working environment for women in the arts.

“It was generally felt that people in the arts got away with a lot under the guise of artistic endeavour or artistic temperament.

“A workplace is a workplace, regardless of whether it’s an artistic workplace or not.

“We had a lot of anecdotal evidence that there was a problem, but it’s very difficult to do something about that when you don’t have specifics. So the executive commissioned the survey.

“The problem wasn’t limited to any one person or any one place, the problem appears to be cultural within the arts industry.

“Over half (57.3 per cent of respondents) reported being bullied in the workplace and an even larger amount (62.2 per cent) reported having witnessed it – what they all had in common was that very rarely did they ever report it.

“Being freelance is a huge part of the problem – fear of [not] getting more work. That’s not to say that the problem doesn’t exist in artistic employments where people have a lot of power and they have the ability to hire and fire at will. But certainly for freelance people, it is much more significant, they are the original precarious workers, they depend very much on their reputation.

“If somebody sets out to besmirch their reputation by suggesting that they might be unco-operative or that they might be awkward, all because they wouldn’t co-operate with something else of an inappropriate nature, well then that’s a very serious problem in my view.

Ms O’Loughlin said such problems were not new and that Irish actor Maureen O’Hara had talked about it as far back as the 1940s.

She said she did not agree with the Taoiseach’s comments about systemic bullying.

“I don’t agree, I think it slightly diminishes the problem because if somebody is inappropriate with you at work or touching you inappropriately, they don’t have to do it every single day for it to be systemic.”

People could, by their actions, “create very hostile environments”, she said.

The Man Who Killed Don Quixote: Compromised and astonishingly unfinished
5