Bram Stoker festival: everything you need to know

Here’s the best spot to watch Monday night’s parade from, and our picks from the festival’s events 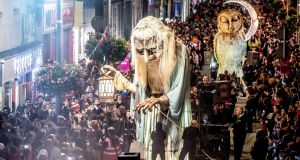 The October bank holiday weekend is one of the busiest for events, as a rake of festivals make a last-minute pitch for your entertainment pocket. Both Metropolis and Samhain have heavyweight line-ups this weekend. This weekend, though, the Bram Stoker Festival in Dublin really gets into the spirit of the season.

When and where is it on? Four days and nights of ghoulish events take place across Dublin from Friday, October 27th to Monday, October 30th.

Colin Dunne and Joan Sheehy have collaborated on Whitby, a show that explores the chilling voyage of the Demeter as it brings Dracula from Romania to the port of Whitby. Expect the haunting atmosphere of the Smock Alley Boys’ School theatre space to play its own part.

For those faint of heart, perhaps a daytime guided tour of Glasnevin Cemetery might be manageable? On Saturday, it will concentrate on the history of “resurrectionists”: graverobbers who provided fresh cadavers for the medical monster students at the Royal College of Surgeons and Trinity College Dublin. You might need to straighten the nerves in Kavanagh’s pub afterwards.

Do you sometimes read the Ticket pages, and tear your hair out at our critics’ opinions? Are you infuriated with their take on Stranger Things 2? Now you can have your revenge: Peter Crawley and Patrick Freyne will be taking part in a Q&A on the anatomy of a critic. The would especially love it if you held the whole thing up by asking them a long-winded, not so much a question really, more of an observation on anything you like. It takes place at 1.30pm on Saturday in the National Library of Ireland Reading Room, and also features Nadine O’Regan, Saoirse Anton and Seán Rocks.

On Sunday night, Al Porter will be hoping to take you off to Camp Dracula, in a comedy show that’s not suitable for children. It’s at Number 22, South Anne’s Street. And running all weekend at D Light Studios is We Are the Monsters, a terrifying- sounding night of storytelling, interviews and theatre, that looks at how horror can help us process the world we live in today. It features Lauren-Shannon Jones and Hannah Mamalis.

Pick of the Bram Stoker bunch, though, is probably the Macnas parade (above), which starts at 6pm on Monday night at Moore Street. If you want a decent viewing spot, get in place well before then.

This performance, called Memory Song, will be led by an old mystic, who is “journeying onwards from this world into the next, following the song of the spirits”.

Do I need tickets: There is a mixture of paid and free events, but many of them require booking. See bramstokerfestival.com for details.