‘Sallynoggin was her Vietnam’ RossOCK says of his mother

Postcards From The Ledge review: OMG – are those like actual feelings Ross O'Carroll-Kelly is having? 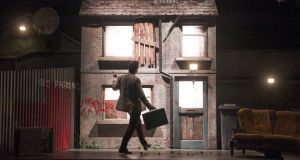 ‘Sallynoggin was her Vietnam,’ Ross says of his mother, recalling his own bitter brushes with social prejudice. Photograph: Patrick Redmond

It is 2029 and the managing director of Hook, Lyon & Sinker takes a quick look at a dilapidated property, new to the market, talking up its value the way a snake charmer might raise up a python.

“Retains much of its original character . . . scope for improvement . . . a colourful history . . . ” goes his flitter of euphemisms, which might as easily describe himself. That’s not a trivial association, because this edifice in “the hort of Glenageary” (really an arterial spurt away in Sallynoggin) is his childhood home. Its poky façade is pleasingly realised by designer Grace Smart and so handsomely lit by Paul Keogan that it sometimes glows with Ross’s nostalgia. Home is where the hort is, and here it also signals a commercial comedy wrapped up in a memory play.

Paul Howard’s fourth stage work for Landmark Productions gives Ross a bijou new accommodation, downsized from the previous energetic ensemble pieces to a “cosy” solo show. Inevitably, something is lost in the move, such as the comic dynamism of director Jimmy Fay’s previous stagings. Here, he concentrates instead on a carefully structured, fluid monologue, closer to Howard’s familiar prose, delivered with the brio of a stand-up act. The major gain is that, as Ross, the fleet-footed Rory Nolan is allowed to display his brilliantly nimble versatility, breezily portraying Howard’s wider gallery of characters.

That suggests that Ross is as good a mimic as Nolan, a surprising gift for a character so defined by self regard. But Fay and Nolan recognise that story-telling has always been one of Ross’s discrete talents. He is a champion noticer of personality and detail, summoning up his sozzled, dissatisfied mother, Fionnuala, his charmingly corrupt father, Charles, his ambitious wife, Sorcha (“She’s the Hilary Clinton of Irish politics,” he tells us, “and I’m the Bill”), and his legendarily mismatched children, Ro and Honor. (Most characters also feature briefly in voice-over too, as Ross fields urgent calls on his presumably retro iPhone 6.)

Surging this far into the future mostly allows Howard to pursue previously uncharted plot lines. Here, it is Honour’s wedding day, and Ross’s onetime demonically entitled daughter is marrying a man slightly older and infinitely kinder than him. Refusing to attend, Ross describes his hilariously craven attempts at sabotaging the relationship, bringing some of the funniest moments of the play, while memories of his own past continue to arrive unbidden.

“Sallynoggin was her Vietnam, ” Ross says of his mother, recalling his own bitter brushes with social prejudice, like being told by his childhood crush that his accent might damage her future employment prospects.

Bringing Ross closer to three dimensions does lessen the bite of Howard’s satire, however, as though the character must be carefully humanised just to share a room with us. With the declining health of his parents, a poignant life stage, Ross’s own vulnerabilities surface, but his childhood memories can slip into easy sentimentality.

That is unlikely to bother his fans, anymore than his author, who have grown fondly protective of this accidental chronicler of our lives. Even retreating from his family into the confines of a solo show, to sifting through his memories, Ross can never be left alone.