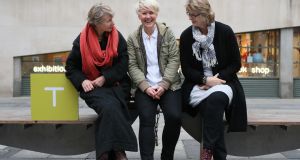 Playwright and actor Amy Conroy has been awarded the 2017-18 Phelim Donlon Playwright’s Bursary and Residency, which allows time, physical resources and mentoring to support writing a new play.

Amy Conroy, artistic director of HotForTheatre and currently writer-in-residence with Rough Magic Theatre Co, was selected from a shortlist of 10 by a panel including Siobhán Bourke (Irish Theatre Institute), Dr Pat Donlon and playwright and director Martin Murphy.

She has written several plays including I (heart) Alice (heart) I, The Eternal Rising of the Sun, Break and Luck Just Kissed You Hello.

She recently performed in Futureproof, at Cork Midsummer and Dublin Fringe festivals and Martin Sharry’s Playboyz in Dublin Theatre Festival 2017, and directed Me Sara (Priming the Canon) for the Abbey Theatre, in the Peacock and on tour.

The award includes an ITI writer’s bursary of €1,000 and a two-week resourced residency in Annaghmakerrig early next year, so Conroy can develop a theatre project exploring how “gaslighting” is used to question memory, perception and sanity.

Siobhán Bourke, co-director of Irish Theatre Institute said “Amy is an immensely creative writer with a number of high profile plays and productions behind her and the award will afford her some time to reflect and grow as a playwright.

“We believe the combination of a two week residency in Annaghmakerrig and a small bursary should enable Amy to stretch her writing practice and develop new work.”

Amy Conroy said she was “really thrilled to be awarded the Phelim Donlon Bursary. It’s a hugely appreciated and a valuable endorsement for me as a playwright, and it has come at just the right time.

“I’m looking forward to the freedom and space it offers to write without self-editing or the pressure of a looming production.”

The bursary was set up in honour the late Phelim Donlon, former film, drama and opera officer at the Arts Council, and a committed advocate for emerging talent, particularly in drama. He died in December 2014.