The Abbey Theatre’s directors Graham McLaren and Neil Murray on their second programme, forging new collaborations and looking for new forms of theatre 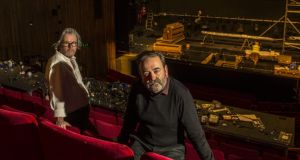 The door of the Abbey directors’ office opens to reveal an almost touchingly Dickensian sight. Graham McLaren, still recuperating from flu, is holding on to a storage heater for warmth. “I turned it off over the weekend to save money,” says Neil Murray, his co-director and strategist, from the opposite side of a long board table. “Bah humbug,” retorts McLaren, whose spirits seem otherwise undiminished. “That’s an actor’s per diem,” reasons Murray.

It’s tempting to see this as a characteristic exchange of Murray and McLaren’s early tenure at the head of the National Theatre – approachable, good natured and cost-effective – as they prepare to announce the programme for their second year.

McLaren, the director and designer, is in many respects the showman of the partnership: an entertaining and bluff orator, he also staged three Abbey productions last year. Murray comes across as the canny operator, more cautious in conversation but as refreshingly frank. It is an effective pairing: together they have quickly arrived at a quietly game-changing new model for the Abbey, featuring more productions over shorter runs.

As with the National Theatre of Scotland, from where Murray and McLaren hailed, there’s an emphasis on co-production and collaboration

As with the National Theatre of Scotland, from where Murray and McLaren hailed, there’s an emphasis on co-production and collaboration: significantly with Anu Productions on The Lost O’Casey Play; Landmark Productions and the Everyman on Meadhbh McHugh’s adaptation of Louise O’Neill’s Asking for It (another work revolving around sexual assault); the Lyric Theatre on a revival of Thomas Kilroy’s second World War drama Double Cross; and Thisispopbaby on Tara Flynn’s affecting monologue on abortion, Not a Funny Word, staged offsite at The Complex.

Among regular collaborations with the Dublin Dance Festival, the Dublin Theatre Festival and the Dublin Fringe Festival, and special events such as Musictown’s series of concerts, that leaves five new in-house productions. Porcelein, a new play by Margaret Perry, is that near-mythic thing: an unsolicited script from a new writer.

“The quality of the writing is so strong we knew we had to do it,” says Murray. A contemporary narrative paralleling the fate of Bridget Cleary, the Irish woman famously burned for witchcraft in 1895, it leapt out at them from the in tray.

“Something we’re doing in the programme is looking at different art forms to ask what should theatre look like now?” says Murray. “That can be as simple as Michael Keegan Dolan doing Swan Lake. It can look like [choreographer and dancer] Oona Doherty doing Hard to Be Soft [for Dublin Dance Festival]. I’m really keen that we’ve had something that looked at how all the art forms come together in one piece, and Gina’s piece kind of does that.”

By introducing free previews, while featuring works both unfamiliar and populist, the Abbey has refreshed the profile of its audience and its associates

This begs an obvious question: what does the Abbey look like now? By introducing free previews (which will be extended to the Peacock in 2018), while featuring works both unfamiliar and populist, it has refreshed the profile of its audience and its associates. “There was a sense that it was a lock out [before],” McLaren says. “Even if that’s a perceived barrier, it’s still a f***ing barrier.”

McLaren and Murray had hoped someone would write a “state of the nation” play. “And actually no one wants to do that at the moment,” says Murray. Instead, Anu’s venue-ranging exploration of O’Casey’s 1924 play, Nannies Night Out, or Colin Murphy’s show for Fishamble on the 1980s “Gregory Deal” revisit stress points in a State’s history for their relevance today.

McLaren’s production style, as seen in the agit-prop céilí of Jimmy’s Hall, and the bawdy music hall of Ulysses, might be seen as a move towards a new Abbey signature.

“When you put that socio-political content within popular form, people really respond to it,” he says.

Kinahan’s The Unmanageable Sisters, which takes its title from DeValera’s assessment of women (“the boldest and most unmanageable revolutionaries”) and which McLaren will direct, may be in same model. But McLaren is reluctant to see that as the house style.

“What I love the most is to be in a packed auditorium,” he says. “For a long time, we had come to the Abbey and felt all too often it wasn’t busy enough, it wasn’t lively enough and we want to get people into the habit of coming.”

A fleet-footed pub tour of Roddy Doyle’s Two Pints last year and debuting Jimmy’s Hall in Leitrim, has been an effort to break down preconceptions. “It’s all allowed,” McLaren says. “That would be the house motto.”

‘Katie Roche’ didn’t set the heather on fire, as they say in Scotland, but we were very proud of it. I think it should inspire us to go back to Teresa Deevy

Box office alone is an inadequate way of guiding a programme or gauging its success, though. Katie Roche, although widely acclaimed and important to stage, played to half-empty houses. “What we’ve learned is that our instinct to do the shorter run was right,” says Murray. “Katie Roche didn’t set the heather on fire, as they say in Scotland, but we were very proud of it. I think it should inspire us and others to go back not only to Teresa Deevy, but to that kind of work. The flip [side] of that is you do Ulysses for four weeks and people go, my god, you could have run that for months.”

Ulysses and Jimmy’s Hall are scheduled to return next year, however, as proven bankers, while  Sean Holmes’ staging of The Plough and the Stars will also return to the stage.

Not everybody is content. The theatre may produce as many shows as it used to, as McLaren points out, but shorter runs mean shorter contracts for actors and crew. Meanwhile, in providing a regular platform to the stalwarts of the independent sector, it potentially starves other venues’ content.

If, as some speculate, the Abbey will receive an increase in funding from the Arts Council’s meagre €3m increase for 2018, while others hit a standstill and project grants diminish, resources and opportunities may be concentrated in one institution.

“The Abbey’s responsibility is, of course, to artists, hugely,” says Murray, “but it’s also to audiences as well. I think that’s a balancing act that we have to get right. In some ways I think we’ve been a great opportunity for artists. A lot of people said, ‘My God I never though I’d work at the Abbey’. Other people have said, ‘I don’t have the opportunities I used to have’. We need to address that.”

As the national theatre, however, the Abbey has always been all things to all people. McLaren is both energised and awed by such political and cultural scrutiny. “One of the amazing things about coming to work here at the Abbey is that it matters.”

Their time so far has been encouraging: most productions have done well enough to keep the heating on through the winter months.

“The marvellous thing for me is the appetite for theatre,” says Murray, reflecting on year one. “When that appetite hits here, it’s kind of visceral. [Corn Exchange’s] Dublin by Lamplight, that first Saturday night when the theatre was full, people were roaring at its depiction of the Abbey. The audience realised, this is going to be fun.”

McLaren remembers their warm greeting in Carrick-on-Shannon for Jimmy’s Hall. “It was a way for Neil and me to say, thanks for letting us in. Because we’re aware we’re not from here, and we want to be respectful, but not reverential. We’re like your cousins. We’re going to sing some different songs.”

5X5
A call out for five development weeks in the Peacock over the year, with presentations in April.

Not a Funny Word By Tara Flynn
Part of THISISPOPBABY's Where We Live programme
Mar 6-10, The Complex

Opera Briefs
David Adams, conductor
Presented by the Royal Irish Academy of Music in collaboration with the Lir National Academy of Dramatic Art at Trinity College Dublin and in association with the Abbey Theatre
Mar 27-29, Peacock stage

On Raftery’s Hill by Marina Carr
Apr 27-May 19, Abbey Stage

The Lost O’Casey
Anu Productions and the Abbey Theatre
Jun 18-30, Peacock stage and beyond

Asking for It
By Louise O’Neill
Adapted for the stage by Meadhbh McHugh and Annabelle Comyn
Landmark Productions and the Everyman in association with the Abbey Theatre
7-24 Nov, Abbey stage