Best theatre this week: a female perspective on Joyce’s Dubliners 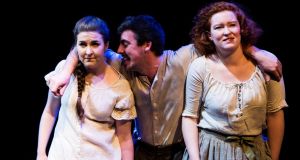 Dubliners Women: the appetite for Joyce’s fiction transplanted to other media has not diminished.

The Man in the Woman’s Shoes
The Dock, Leitrim; November 25th, 8.30pm; thedock.ie
A journey of a thousand miles begins with a single step, they say. It is hard to determine just how many steps, or miles, Mikel Murfi has accomplished since with his solo show, developed for the Bealtaine Festival, which first opened in 2013.

Inspired by memories and stories collected from older people in Sligo, the play’s journey belongs to Pat Farnon, an aging, enthusiastic man who sets out one October day in 1978 on a 10-mile round trip to town wearing a pair of women’s shoes. Encountering several marvels along the way, it becomes a quirky kind of Odyssey.

That won’t sound unfamiliar to fans of Murfi’s work, which has combined physically-adept performance and a comically surreal sensibility since his days with Barabbas and animated his approach as a director for Macnas, Druid, the Abbey and others. It may also have initiated a return journey for Murfi, who has been a more frequent performer since the work debuted in the work of Enda Walsh and others. Most people will travel shorter distances than Murfi to get to know these characters, but at least everyone gets another chance to walk a mile in their shoes.

Dubliners Women
Wexford Arts Centre; November 25th, 8pm; Nenagh Arts Centre, Tipperary. December 2nd, 8pm.
Since the work of James Joyce came into the public domain in 2012, for the second time as it happens, a few of the commentariat have wondered how the appeal of the writer would withstand the tide of deregulated adaptation.

As it turns out, the appetite for Joyce’s fiction transplanted to other media has not diminished: the Abbey’s production of Dermot Bolger’s Ulysses was a surprise sell out, and writer Katie O’Kelly’s adaptation of three of the short stories from Dubliners now ends its current Irish tour.

Concentrating on the tales of Eveline, Clay and The Boarding House, O’Kelly’s project brings its focus to female perspectives in the collection and finds their political resonance with Ireland today. O’Kelly performs alongside Madi O’Carroll and Gordon Quigley, directed by Sarah Baxter.

The Woman is Present: Women’s Stories of WW2
Draíocht, Blanchardstow, Dublin; November 30th, 8pm €16/€14; draiocht.ie
Smashing Times Theatre Company stages a programme of imagined moments from real histories, recalling stories of bravery, sacrifice and love during the horrors of the second World War, as women stood up against Fascism, totalitarianism and oppression. Deirdre Kinahan’s play Ode to Ettie Steinberg, Mary Moynihan’s My Name is Neus and performances from Fiona Bawn Thompson and Paul Kennedy pay tribute to such figures as Mary Elmes, who saved Jewish children from Nazi concentration camps, Ettie Steinberg, an Irish Jew murdered in Auschwitz, and German woman Marta Hillers,  whose anonymous autobiography detailed her experiences, and those of innumerable others, as victims of Allied soldiers and the Red army.