‘It was tough . . . but I’ve stepped into a time in Irish theatre that’s really alive’

The Gate: Twenty-one-year-old acting newcomer Paul Mescal has been cast in some of the country’s biggest theatrical productions 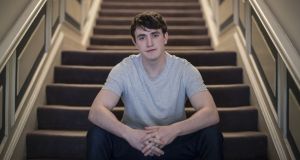 Top of the world: Paul Mescal’s nosebleed trajectory in Irish theatre has certainly singled him out as one to keep an eye on. Photograph: Ste Murray

When Selina Cartmell launched her inaugural season as director of the Gate Theatre last May, the photocall was predictably starry. Flanking Cartmell were Camille O’Sullivan, Roddy Doyle, Owen Roe, Emmet Kirwan and a number of other artistic collaborators. And in the middle of it all, a fresh – and very chuffed – face: 21-year-old Paul Mescal, at that point still a student at the Lir Academy.

To say that Mescal has made good on his time since graduating from the Lir’s acting degree in July is an understatement; he’d had been offered two high-profile theatre roles before his final graduation play, for a start. The first was a part in Angela’s Ashes: The Musical. And after Cartmell had seen him in a student production of Mojo, he then landed a part as young Jay Gatsby in The Great Gatsby. Because of scheduling conflicts, he decided on the latter.

“For her first play (as Director of the Gate), she allowed me to play Gatsby and I was like, ‘are you sure?’” he recalls. “I went down with a couple of classmates to the audition, and we were just happy as Larry to have gotten our first auditions for the Gate out of the way. The walk back to the theatre (for the callback audition) was completely different, because only then did I realise I really wanted it. When I found out I’d gotten the job, I was in the middle of Pearse Station, bawling crying.”

Job done on landing a role of one of Irish theatre’s most prolific productions of the year, there were a few fire baptisms in store. There was the physicality of the high-kicking production, which took over every inch of the theatre. It being an interactive experience, The Great Gatsby audience were free to follow a whole loop of narratives in the production in 23 spaces. For Mescal, there was the not insignificant matter of his first on-stage love scene with Charlene McKenna’s Daisy. “It’s like doing any other scene,” he shrugs. “It’s two relative strangers kissing, but then it’s just choreography from there. And Charlene was great to work with.”

More concerning to Mescal was his dress rehearsal performance in front of his old compatriots from the Lir: “I thought I’d be so nervous for the actual play, but I wasn’t any less nervous compared to doing shows in college. I remember sitting with Owen (Roe) in the hospitality room ahead of the dress rehearsal though, and I was like, ‘I’d rather just go to Cassidy’s and hide’. But in the end, it was the best audience you could ever get.”

Mescal and Roe reunite for the Gate’s next production, a contemporaneous retelling of Hans Christian Anderson’s beloved fairytale The Red Shoes. Mescal plays the Prince, albeit with a twist. He stars opposite Karen (Stephanie Dufresne), an orphan adopted by a wealthy Dublin family who believes that, after receiving a beautiful pair of red shoes, that all of her dreams have come true.

This is first production that Cartmell will direct herself (Alexander Wright directed Gatsby) and already, it’s being described as a multi-faceted piece that will play with the audience’s expectation of children’s theatre. In yet another pinch-me moment for Mescal, Rosaleen Linehan, Marion Dwyer and David Pearse also star.

Of what he is learning from his more seasoned co-stars, Mescal notes: “It’s almost by osmosis. There’s a relaxation there, but their nerves never leave them. I trundle around in rehearsal, but there’s an efficiency to them which I find really impressive.”

The Gate to which Mescal walked in almost six months ago is a different beast to the theatrical institution it’s been for years. Last month, Grace Dyas and a number of young female arts practitioners went public with allegations of harassment and bullying against the Gate’s former long-standing director Michael Colgan. Some of the Gate’s staff, it was alleged, had been labouring for many years under a toxic cloud. The fallout from the controversy pushed the opening of The Red Shoes back by a week. Cartmell has publicly said that she intends to create a workplace environment underpinned by collaboration, openness, accessibility and equality.

“She’s brilliant to work with,” enthuses Mescal. “Her process is so clear. There’s an obsession there that drives the cast along.”

On watching the fallout of the Colgan allegations from a unique vantage point within the theatre itself, he adds: “It was tough, actually. What’s funny is, I’ve stepped into a time in Irish theatre that’s really alive. Selina has had this absolute faith in young actors, and you have Graham (McLaren) and Neil (Murray) doing great work over there (in the Abbey), and then a kind of tarnish comes on it. It was incredibly upsetting to be involved with and removed from at the same time.

“I’d never experienced the building before (Cartmell), apart from seeing plays, but it does feel really fresh,” he adds. “It’s like she’s opened the building up. It’s like a fever has broken except the people in the building were really healthy.”

Mescal’s nosebleed trajectory in Irish theatre has certainly singled him out as one to keep an eye on, and he recently signed to the acting division of Curtis Brown (home also to Tom Holland, Kaya Scodelario and Robert Pattinson). For now, Mescal – who played Under-21 GAA for Kildare until recently – would like to focus on theatre, with an eye trained on eventual film or TV work.

“(Acting) has a similar feeling to sport,” he says. “There’s an element of performance there. When you step into a match, it’s the same type of nervous energy to it.”

Pressed to name an actor with the type of career he wouldn’t mind eventually having, he cites Barry Keoghan, Colin Farrell and Cillian Murphy.

“What I love about Cillian is how he falls back into theatre, almost as a medicinal thing. It’s a really exciting time to be an Irish actor right now, especially in London,” he says. “I’d love to be thought of almost universally as a good actor.” As to the idea of proper, movie star fame: “That would intimidate me a bit,” he sighs. “If ever it came up, I’d something I’d have to adjust to, I suppose. Or disappear from.”

* ‘The Red Shoes’ opens at the Gate Theatre on Wednesday, December 6th and runs until January 27th. For more details see gatetheatre.ie