The best theatre shows of the week

Remembering ‘The Simpsons’ as a dark comedy with serious heft, keeping a seasonal Dickens classic warm with cheer, and recalling Cinderella’s origin story 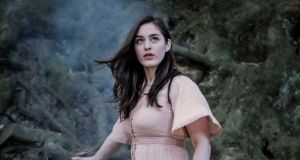 There are countless versions of Cinderella, stretching back to the earliest reaches of civilisation.

Mr Burns, A post-electric play
Project Arts Centre, Dublin. Ends Dec 9 7.30pm €18/€14 projectartscentre.ie
Not only has it become considerably easier to imagine the end of the world in recent months, it also seems perfectly plausible that one of the few things that will survive are The Simpsons references. Anne Washburn’s 2012 work, Mr Burns, A Post Electric Play, is a dark comedy with serious heft: even its title reminds you about our fragile resources.

In the same way that faith and folklore persists through generations, a group of nuclear fallout survivors meet around the campfire “in the very near future”, and recount together the plot of the “Cape Feare” episode of The Simpsons. Classic that it is, the details are already loosening and prone to distortion. The story is told again seven years later. Then 75 years later. If humanity is defined or healed by the stories it tells itself, what happens to us through these imperfect re-runs?

The play’s Irish premiere provides Rough Magic with an intriguing vehicle for the Seeds showcase. In this rare instance it is directed by former alum, Ronan Phelan, and exhibits the talents of designers and a composer, featuring an ensemble of eight performers and three musicians. Bake him away, toys.

A Christmas Carol
Viking Theatre, Clontarf. Dec 11-23 8pm €15 vikingtheatre.com
One of Charles Dickens’s most enduring and seasonably unavoidable works returns in an economic and traditional storytelling form.  Michael James Ford, Helene Montague and Ruairi Heading bring the story of Ebenezer Scrooge and his abrupt spiritual conversion by three ghostly visitors back to the stage in a theatrical adaptation with a live musical score, accompanying Scrooge’s tumbling realisations alongside the ghosts of Christmas past, present and future with Victorian songs and carols.

The Grimm Tale of Cinderella
Smock Alley Theatre. Until Dec 23 7pm (Sat and Sun mat 2pm) €18/€15 smockalley.com
It has become so sanitised by the antiseptic treatment of Disney, or the automatic recitation of pantomimes, that you have to stop to think about the origins of Cinderella, the mistreated young woman of her father’s first marriage, who rises, through enchantment and good fortune, to the station of a beloved princess. In truth, there are countless versions of the story stretching back to the earliest reaches of civilisation. But the version we know, popularised in the 17th century, found its more familiar shape in the Grimms Brothers’ Aschenputtel, in 1812, with details considerably more dark and gory than modern kids expect. (The sisters, for instance, mutilate their own feet to fit the slippers.)

Now, Katie McCann, of the well-regarded Cirque des Reves, imagines the Grimms subjected to a similar fairytale.  Seeking shelter from a storm, Jacob and Wilhelm Grimm encounter a strange old woman and share with her the stories of their travels, before she responds with the tale of Ella, her cruel stepmother, a handsome prince and the night that would change her life forever. Please, no spoilers.

Cancel culture: can you defend people who say unpopular things?
10