Behind the scenes at Gate Theatre's 'The Red Shoes'

Selina Cartmell’s dark version of the fairytale has just opened at the Gate Theatre. Here’s how the story of dance and destruction took shape 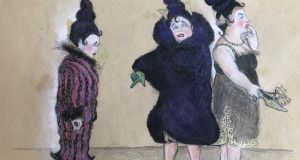 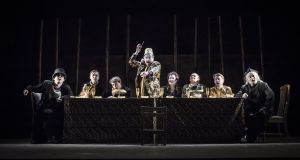 Cast members of the Gate’s production of ‘The Red Shoes’. Photographer: Ste Murray 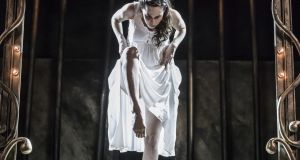 Perched in the back stalls of the Gate theatre, I am watching a late-morning rehearsal of The Red Shoes, Hans Christian Andersen’s fairytale of dance and destruction.

On stage, framed by a gilded double proscenium arch, is a banquet tableau that looks like an 18th-century painting which has suddenly come to life. The silhouetted figures are in slow motion, cutlery is flying, voices are raised. And then I see them: the dangerous daubs of scarlet, vivid against the velvety dark and gilt. It’s the red shoes, and a young woman is gaily hammering out a hopscotch dance in them, on the banquet table. It’s mesmerising, a glimpse of the first contemporary dance performance at the Gate.

This has not been a show without its problems. Recent allegations about harassment and bullying by Michael Colgan, the previous artistic director of the Gate, as reported in this newspaper, have preoccupied the Gate’s energy. The production’s opening night has been pushed back by a week. But Selina Cartmell, the current artistic director, and her team are resolutely in the moment, sparking and forcefully back on track.

“When I say the chandelier is spinning, Rosaleen you start to move . . . and Owen, maybe come down a little further.” Cast members Rosaleen Linehan and Owen Roe are refining those moves as Cartmell stands close to the stage, suggesting a few other adjustments. The visual clue of that chandelier is not yet in place; the staging is still waiting for Paul Keogan, the show’s lighting designer, to add his alchemy.

It is no surprise that this production should have a dancer at its heart. The Red Shoes has been adapted by Dublin-raised, London-based playwright Nancy Harris. In her version of this magical, scary and violent fairy tale by Hans Christian Andersen, Karen, a young orphan girl, and her red shoes have been transported from Andersen’s Copenhagen to an imagined affluent Dublin suburb.

Karen’s role is taken by dancer Stephanie Dufresne (last seen in Emma Martin’s Dublin Theatre Festival show Girl Song) and dance is woven throughout the production. As Harris explains: “I have never worked with dance before but I was excited by the challenge, nervous too. I knew it simply wasn’t going to be enough to weave dance into the story; dance had to be integral to the central character’s emotional journey too.”

Choreographer Liz Roche is another member of this high powered, strongly female creative team. “When I read the script, I thought, this is really ambitious, but what is thrilling is that I realised this is not about being a movement director for a few scenes,” she says. “This is actually creating dance designed to keep the narrative moving ahead and so it is teeming with that intention.

“Selina thinks a lot in movement, she has a real eye for the visceral and so it’s not only the voice in her theatre but also the body,” she adds. The dance “should tell us as much if not more about Karen than words ever could”.

Roche’s musical partner in the production, composer Mark Teitler, is hard at work behind an improvised rehearsal mixing desk. “The score and songs should also help to illuminate the interior of the characters, their repressed dreams, secrets and desires,” he says. “There are adult themes. We are not overworking them but we are touching on them: an unforgiving society, repression, faux charity. The songs are there to establish these revelatory moments. Even Clive [a would-be villain who enjoys skewering and dissecting small animals] has his song; his actions are a sick cry for help.”

As for Karen, “the music and the dance speak for her. The tango, that music and that dance, is her voice”.

Many of the artists on the show have already worked together. “Shorthand between collaborators can be a huge benefit,” says Teitler. “Nancy is very musical and she and I worked together in London on a recent musical Baddies, where Nancy wrote the lyrics.”

The premise of this work was a call for caution in overfluffing fairy tales for children. It’s a timely thought: we all need our heroines and heroes but we also have to face up to our rogues and villains, in the theatre and in the real world.

From composition to costuming, I next follow designer Monica Frawley up the narrow flights of back stairs to the wardrobe department. It’s a step back in time, to a hub of illusion and magic making where high tech has yet to make much of an impact. I glimpse old black Singer sewing machines and in the small room, the wardrobe supervisor and her staff are seated and dewing by hand, swathed in colourful fabric swatches, and half-completed costumes.

Outside on the “ready to go” rail there is an outrageous fur coat tinged with purple. “It’s to match the hair,” Frawley says mischievously. So watch out for actress Marion O’Dwyer in this sublime matching outfit. A tone of the show is emerging: painterly, highly visual, dark, humorous, a little larger than life. Would operatic be fair?

Monica Frawley agrees, saying its larger than life at times but “definitely not panto”. A chaise longue incongruously parked in a narrow hallway allows us to leaf through her delicate, miniature draft sketches: “I love starting small.” They unfold like a moving picture show, each pencilled frame an idea of how a costume might look in a different position in the action.

She describes the play’s Andersen fairy tale-themed ball sequence and I sense the equivalent of a designer’s sugar rush. The Princess and the Pea with signature mattresses will be one of the cameos, so it might be wise to re-read the Andersen tales so you can enjoy some witty visual tricks.

The shoes themselves are not like the gleaming red satin ballet pumps worn by ballerina Moira Shearer in the film version of The Red Shoes. Instead they are real shoes with heels and glittering sequins, in perfectly exuberant scarlet. But, Frawley insists: “The shoes are nothing, nothing at all without Stephanie. It is really all about the dancing and how she brings them to life: that’s the fairy tale.”