‘I want to understand the anger in the world’

John Tiffany is the genial man behind the Abbey’s ‘Let the Right One In’, is also the most sought-after director in the world 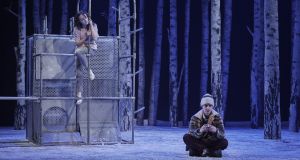 Katie Honan as Eli and Craig Connolly as Oskar in ‘Let the Right One In’ at the Abbey Theatre. Photograph: Ros Kavanagh

At one grimly appropriate moment during John Tiffany’s conversation, the lights suddenly go out and we are plunged into darkness.

“I’ve heard about these kinds of interviews,” the director jokes as we flap our arms hopefully towards a motion sensor.

We are outside the Abbey’s rehearsal room for Let the Right One In, confined to a corridor space that is as roomy, if not quite as cosy, as a typical coffin. The talk had just turned to nightmares. These, admittedly, are the more entrancing kind, the ones which prowl through John Ajvide Lindqvist’s novel about a bullied Swedish school kid, Oskar, and his ageless vampire protector, Eli. That story’s engrossing and chilling images – “snow and blood”, Tiffany summarises – brought a fascinating shiver to its spectral film versions, and, in 2013, to writer Jack Thorne’s stage adaptation given a world-conquering production by Tiffany for the National Theatre of Scotland.

It might not have seemed the most obvious project for the director of Black Watch, Gregory Burke’s brilliant account of the history and demise of the Scottish military regiment, which put the fledgling National Theatre of Scotland on the map in 2006. Or for the director of the musical Once, Enda Walsh’s unlikely adaptation of John Carney’s film, which ran on Broadway for three years and secured Tiffany the Tony for best director.

Both of those productions, despite their producers’ vast expectations, were defined by a sense of modesty and ingenuity: the visual invention that might have the felt of a pool table slice open to reveal two tense soldiers conducting a patrol in Iraq, say; or give a commercial musical the intimacy of a lock-in at an Irish pub.

Tiffany is approachable and gregarious, a chatty and quick-witted Yorkshire man who will rail against Trump, Brexit and sexual harassers at the merest invitation

Yet Let The Right One In may also have been a pivotal production for Tiffany. It brought together his attraction to fantasy, politics and visual storytelling, while addressing an audience that encompassed steely young viewers, awakening adolescents and wary adults. It also served as a springboard into his next extraordinary adventures.

The first was Harry Potter and the Cursed Child, again created with Thorne, which opened in London last year and is already a contender for the most successful production of all time. (An expected commercial juggernaut, it also proved a critical hit, winning Tiffany the Olivier Award for Best Director among a record nine awards.) Hopes are just as high for Pinocchio, Dennis Kelly’s adaptation of the Disney classic opening next month at the National Theatre in London.

Pulling his woolly hat down to his eyebrows for fear of catching cold, Tiffany is an approachable and gregarious presence, a chatty and quick-witted Yorkshire man who will energetically rail against Trump, Brexit, sexual harassers and, while we’re at it, “the inexorable trampling of capitalism”, at the merest invitation. He is so bluff and unassuming that you have to remind yourself that he is also one of the most sought-after directors in the world.

In part, that may because he has been insulated from the pressures of success by a mutually loyal team – he frequently works with the movement director Steven Hoggett, writers Walsh and Thorne, designers Christine Jones and Bob Crowley. But he also shares a condition that defines some of the characters in his work; a certain agelessness of creativity and imagination.

“I suppose it’s Peter Pan in reverse,” he says of Let the Right One In. “Peter Pan was always this kids’ story that terrified me, and still I wanted Peter to come and take me away to Neverland. I realised this is a kind of adult version of that. The whole notion of never growing up is incredibly intense and emotional.”

That could easily be applied to the artist: “The creative adult is the child that survived,” the writer Ursula K Le Guin once observed. But Tiffany will balance his restless capacity for discovery with darker interpretations for a troubling world. “The only way to never grow up is to be dead,” he says of Peter Pan. This is precisely what Eli means when the child vampire in Let The Right One In tells Oskar, “I’m not a girl.” It’s also close to Pinocchio’s dilemma over transforming into a real boy. “By becoming real, it means he’ll age,” says Tiffany. It’s a sobering notion. Growing up can be fatal.

“I realise that there’s something about fantasy, whether it’s written by the Grimm Brothers or JK Rowling or Thorne or JM Barry, that it gets closer to the human experience than realism every could,” says Tiffany. “The story of Harry Potter [and the Cursed Child] is very much about somebody wanting their child to be resurrected. Like someone who loses their child in a war in Afghanistan or Iraq – the unnatural thing. You would do anything to get your child back. And in Harry Potter it’s possible.”

I had wondered how Tiffany, a director known for his strident politics, retained that dimension in his more commercial undertakings. As he describes it, the imagination is a political tool. In the womb, he says, we develop the capacity to use eight octaves, but by the time we learn to speak “we shrink that down to one, when our bodies are capable of much more. It’s the same with imagination; the imagination to put yourself in somebody else’s shoes. How much do we wish the world was able to do that more at the moment?”

The theatre ought to be a safe space (to use that much maligned term) for such endeavours, and Tiffany tries to ensure that by dispensing with hierarchy in the rehearsal room. The Abbey’s production of Let The Right One In requires little personal contact. Staged like a franchise, it involves Tiffany in its casting and to check in occasionally with rehearsals. But even on a two-day visit, Tiffany and Hoggett were inclined to make changes to the show based on the individual energies of the Dublin cast. It had refreshed Tiffany’s view of the play. “Suddenly everything seems possible,” he told me.

Still, Tiffany was preoccupied by the recent public airing of long-suspected abuses within the theatre, and the culture beyond it, and how aggressors operated within such spaces. “It’s no secret that people like Harvey Weinstein, Kevin Spacey and Michael Colgan have been paralysed at a particular point of entitlement,” he says. The lights flicker off again, like a bad joke, and Tiffany bounces to his feet to bring them back on, “Given what we’re talking about . . .”. Earlier that week, he had attended No Grey Area, a five-hour event organised by his long-time collaborator Vicky Featherstone at the Royal Court Theatre, which heard more than 150 accounts of harassment and abuses of power within the industry and resulted in a published code of conduct to help prevent future misconduct.

This could be a critical juncture in a creative profession, he agrees; losing its innocence without forsaking its capacity for wonder. That too could describe Tiffany’s approach.

He draws no distinction between the appeal of Pinocchio, Let The Right One In, or Jim Cartwright’s Road, a more conspicuously political work staged shortly after “the little wizard play”.

“They’ve all got something to explore about what it means to be a human being,” he reasons. “Or what it means to tell unheard stories. I couldn’t do a project if it didn’t have that political, emotional pull for me. Harry Potter is about the perils of isolating people. Let the Right One In is about ‘the Other’, the vampire, and a little bullied boy whose rage builds up inside him.”

“I want to understand the anger in the world,” he says, drawing a comparison between Oskar and the beleaguered adults around him, and the frustrations he attributes to the vote for Trump or Brexit. “People weren’t voting for Brexit,” he says, “they were voting because they couldn’t feed their kids.”

Recognising, perhaps, the fragile sensitivities of our lightbulb, Tiffany steers the conversation somewhere brighter. “When I get really down, I remember that we all share 99.99 per cent of our DNA with Beyoncé,” he says. “And suddenly the world doesn’t seem too bleak.”