Fishamble wants one play to rule them all 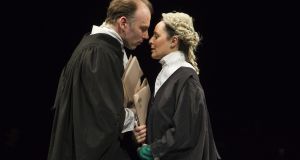 Fishamble: The New Play Company has launched a search for a new “play for Ireland”.

The company is looking for one “big, ambitious play, that bursts with humanity” that it says “captures the zeitgeist of the country”, and it is launching an open call submission for writers of all levels of experience.

It is seeking 300-word treatments for a new play that fits its ambitious outline. The company will then work with 30 writers across six venues to develop their work. It will take out options on six of those plays, one per venue, before awarding a full commission for one work. The partner venues are Lime Tree Theatre/Belltable in Limerick, Draíocht in Blanchardstown, the Everyman in Cork, the Lyric Theatre in Belfast, the Pavilion Theatre in Dún Laoghaire, and the Town Hall Theatre, Galway. It hopes to put on the production at the end of autumn 2019.

The company celebrates its 30th birthday in 2018. Next year, the company will produce four new plays, tour five existing productions, and continue its ongoing development programme. The latest project builds on its Tiny Plays for Ireland, in which it commissioned a selection of short works for the stage. That project was run in association with The Irish Times.