Let the Right One In review: black magic combination of tenderness and brutality 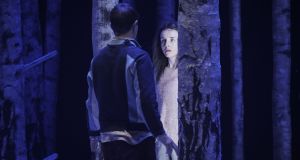 Craig Connolly (Oskar) and Katie Honan (Eli) in Let the Right One In at the Abbey Theatre. Photograph: Ros Kavanagh.

Let The Right One In
Abbey Theatre, Dublin
★★★

“Be safe, kid,” the young Oskar (Craig Connolly) is cautioned before heading out, alone, into the dark and snowy woods.

There is every reason to be afraid. For one, Oskar – a lonely, sweet schoolboy from a broken home – is a magnet for bullies. For another, dead bodies are turning up, hanging in the forest, drained of blood. Still, kids roam free, unsupervised. It’s the 1980s.

A sensitive boy who practises self-defence with a knife, but meets a preternatural icy young girl, Eli (Katie Honan), among the stripped birch trees and steel climbing frame of Christine Jones’s captivating set, Oskar doesn’t know where he belongs, Nor, at first, do we. Is this hesitant relationship the beginning of a fairy tale or a horror story?

In Jack Thorne’s sparing stage adaptation of John Ajvide Lindqvist’s spectral novel and screenplay, it’s a bit of both. Set in the Swedish winter of 1983, against a backdrop of struggling families and Reagan’s Star Wars, it is a dark fantasy about lurking danger and gritted protection. That combination is most unsettlingly conspicuous in a crumbling relationship between Eli, an ageless girl, and Hakan (Nick Dunning), an older mortal man. Outwardly, it invokes contemporary horrors (at one queasy point she offers to undress for him), but the story makes it something toxically co-dependent, and in Oskar, Eli may be grooming a replacement.

There is an adolescent innocence to Eli and Oskar, a mutual need for approval, but around them relationships are terrifying. Parents are blindly self-oriented, such as Oskar’s absent dad (Richard Clements) or his alcoholic mum (the excellent Ruth McGill, expertly balanced between comedy and despair), or well-meaning, failing authority figures such as Bob Kelly in a dual role. “You never ask the right questions,” Oskar finally complains to his mum, but it could apply to everyone. “You never say the right things.” The real chill here is that we’re all on our own.

Invited in by the Abbey (as vampires and franchise productions must be) and given an Irish cast, director John Tiffany’s striking production for the National Theatre of Scotland keeps its sympathies as flexible as the highly physical performance style. In Steven Hoggett’s mesmerising choreography, anguish becomes a dance, bringing the ensemble into ghostly shadows around Connolly’s imagined combat – an army of avengers under Chahine Yavroyan’s hauntingly blue light. Later he and McGill twist affectingly through movements of strain and support against Ólafur Arnald’s beautiful, pervasive score.

As a coming of age tale it favours suppleness in all forms: not only does Honan’s Eli drift weightlessly up a climbing frame or a tree, she doesn’t even define as vampire – “I’m not that,” she says, her voice a slow creaking gate. Nor is she binary about gender. Her advice may be unhelpfully violent, but she keeps identity as an open invitation.

That’s also true of staging this West End hit at the Abbey, which would seem just as at home in the Olympia. Thorne’s briskly episodic script can become thin, trading characters for types, and Tiffany compensates with either entrancing or bombastic effects, some better accommodated than others – the volume, in particular, gets excessively loud.

More enthralling is the black magic of combining tenderness and brutality in every step, in the story of a sweet boy who trades a flick-knife for a vampire. Whether that’s a happy or twisted response to the plentiful dangers of the world, it’s certainly one way to raise the stakes.

Cancel culture: can you defend people who say unpopular things?
5

Laura Veirs: ‘I had a feminist awakening’
Real news has value SUBSCRIBE