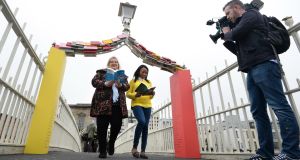 An event at Dublin’s International Literature Festival that was to discuss an anthology of writing about the movement for reproductive rights in Ireland was cancelled by Dublin City Council (DCC) after the council’s city arts officer Ray Yeates raised it with council management.

Mr Yeates brought the matter up with Owen Keegan and Richard Shakespeare, the council’s chief executive and assistant chief executive, because it was “an unusual situation”, given “how specific to the referendum this event was,” Mr Yeates told The Irish Times.

He queried whether the event was “in contravention of any rule, law or procedure about the referendum. I felt it was better to question it now rather than closer to the event.”

The Question of the Eighth event, which was scheduled for May 21st, four days before the referendum, was to be hosted by journalist, Irish Times columnist and author Una Mullally, whose Repeal the 8th anthology includes contributions from Anne Enright, Lisa McInerney, Caitlin Moran and Louise O’Neill. Poet Elaine Feeney and actor and author Tara Flynn were also due to participate in the event at Smock Alley Theatre.

A letter to the editor in today’s Irish Times, signed by over 100 Irish artists, dance and theatre makers who have been funded by Dublin City Council or involved in events funded by the council expressed “deep disappointment and alarm” at the decision.

“We believe this action sets a dangerous precedent for intellectual discourse and artistic freedom and is damaging to Ireland’s reputation internationally. We object to it in the strongest possible manner.”

It calls for the council to “find and apply a mechanism to reverse the decision” and to “ensure protection of artistic freedom by enabling the arms-length principle in every single instance where the local authority funds or part-funds any artistic endeavour”.

The festival programme was announced on April 11th, and the decision to cancel the event was taken on April 27th, following a week of consultation and discussion, which also involved the council’s arts office and communications staff, “so it couldn’t be put it on one or two people. But ultimately it comes down to the CEO and the arts officer,” said Mr Yeates.

“It was a difficult decision and was not taken lightly.”

Yeates said he regretted the decision had been made after the programme had been published. “In hindsight, and having considered this matter, I could have given a better briefing to the programmer on the sensitivities of the referendum.”

The event was cancelled because “the code of conduct requires all public bodies must remain politically neutral,” said Mr Yeates. The wording of the code stipulates “it is important that employees at all times act in a politically neutral way in performing their official duties and in their dealings with councillors.”

Mr Yeates draws a distinction between the literature festival, which is an initiative of Dublin City Council, and other festivals, such as the Dublin Dance Festival and Dublin Theatre Festival, which are independent organisations but are funded by the council. “Within reason they programme with complete freedom,” so “this isn’t an issue”.

In the case of the literature festival, which continues until May 27th, “the programmer is procured by and reports directly to me,” said Mr Yeates.

“If Una [Mullally]’s event was part of the theatre festival - we are a funder - we would not interfere. It’s not that we’re against the event in any way, but in the context of the referendum and the code of conduct the decision was to cancel.”

Asked about censorship, he observed that “it’s possible to put the event on, but not in this festival” and that it would have to be outside the referendum timeframe.

“It’s a dilemma. Do you have complete artistic freedom, or are there any circumstances in the context of a referendum where this should be looked at?” There were, he said, “limits to freedom of speech.”

Mr Yeates said he thought the issue was an important one, and he would “ welcome a positive debate about when is art political. There can be debate and concern about content and legal implications. It’s an important discussion in the arts, which should be about being able to express oneself freely.”

Normally, he said, these issues do not arise.

“I have never interfered on taste or any other matter in seven years. The referendum makes you aware of what you are supposed to be as a council official. If the director programmes something, we must observe the code of conduct. The responsibility of a lot of programming lies with me. I’m an arts officer. I have an understanding of the artistic community and how it works, and we are supportive of culture. But I’m also a city official and therefore have to abide by the code of conduct.”

He pointed out that the Charities Regulator felt a responsibility to intervene about the Repeal the 8th mural by artist Maser at the Project Arts Centre, which was removed last week.

The literary festival’s programme director Martin Colthorpe said today that Dublin City Council had made the decision. In programming the festival, Colthorpe said, he seeks to put together events “that are topical, which celebrate new writing and which reflect the times we live in, and this is one of those events.” He added that in recent years the festival, which is 21 years old, had taken an international perspective and included debate and discussion as well as literary events.

On the ilfdublin.com website there is no announcement of the cancellation on the homepage or under “news”.

In the events section, the panel discussion still appears, with the line “We regret that this event has been cancelled” underneath.

Asked if the council plans to ask participants to refrain from discussing the referendum or related issues at other festival events, Mr Yeates said there are no plans to do so.

“I don’t think that would be in order. All events in ILFD are Chaired or moderated and all opinions are encouraged. No change is proposed in that approach. We welcome the most diverse opinion so I take it that won’t change.”

He said a very positive part of this is the debate.

“Councillors are raising it with me, asking how did we reach the decision, and how can elected members participate.”

The next Dublin City Council meeting is on May 14th at 6pm, and earlier that morning at 9.30 am there is a Strategic Policy Committee meeting, and Mr Yeates expects councillors will raise the issue and ask the executive to comment.

“People are talking to their local representatives and others, and that’s democracy in action.”

‘It was not a campaigning event’

In her Irish Times column Una Mullally wrote: “It was not a campaigning event. It was not a rally or a demonstration or a hustings. If I am said to be “taking a side”, then what does shutting down an event about a book look like?”

She added: “We should not stop people using art to discuss our stories and our society.” She questions whether Dublin City Council will make other interventions if guests at the festival speak about abortion, reproductive rights or the referendum.

She pointed out that in 2015, the same festival had an event around the lesbian love story graphic novel Blue Is the Warmest Colour which featured Ailbhe Smyth discussing LGBT rights and freedom of expression, seven days before the marriage equality referendum.

Mr Yeates said that issue was not discussed by management in 2015.

The National Campaign for the Arts today said it shares “the serious and widespread concern expressed at the recent cancellation of discussion events and removal of artworks, and at the larger implications both of this decision by Dublin City Council and the recent decision by the Charities Regulator regarding Project Arts Centre’s programming of artwork by Maser”.

It said restrictive legislation and subjective interpretations of it are “beginning to have a chilling effect on freedom of artistic expression and on artistic contributions to public debate.”

It said it would actively engage with the issue but recognised “it may not be resolved in the short term and will need to be addressed at a systematic level. This case also highlights the potential legal implications for free speech of a public body directly organising a festival or arts event rather than supporting a civil-society arts organisation to do so.”