‘We are both dragon energy’ and ‘He’s my brother’, says rap star. ‘Very cool,’ says Trump

Rapper Kanye West, almost two weeks after being released from from hospital, arrives at Trump Tower for a meeting with US President-elect Donald Trump. Video: C-Span/Reuters 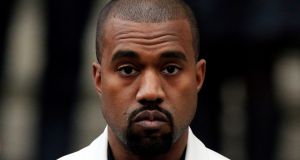 Kanye West: 'You don’t have to agree with Trump but the mob can’t make me not love him.' Photograph: Jonathan Brady/PA

As crazy as it seems, though in this world, that is a high bar, the mercurial president accused of racist comments and the bombastic rapper accused of supporting him have long seemed to enjoy each other’s company. President Donald Trump and rapper Kanye West share a history of unpredictable behaviour, and a delight in freaking out and, perhaps, dividing an already divided public. On Wednesday, the Chicago-raised West and the New York City-born Trump joined forces again, this time on Twitter, with the president thanking West for his public praise, including an assertion that the two were brothers who shared “dragon energy”.

In a string of tweets that seemed to outrage and concern his fans, West tried to defend his admiration for the president from “the mob” of people who “can’t make me not love him”. “You don’t have to agree with Trump,” West tweeted. “I love everyone. I don’t agree with everything anyone does. That’s what makes us individuals. And we have the right to independent thought.”

West, who also tweeted a picture of his Trump-signed “Make America Great Again” hat, seemed to be trying to make the point that he can respect an individual but not entirely agree with him or her. “I love Hillary too,” he wrote in another missive, referring to the 2016 Democratic presidential nominee, Hillary Clinton, who lost to Trump.

But the tweets caused bedlam among West’s fans. They had begun debating his mental stability earlier Wednesday after the rapper confirmed he had parted ways with his manager and then called the president, who has made a series of racially divisive statements, his “brother”.

Given the context, the positive relationship West enjoys with Trump is glaring, particularly because West has been vocal about how past presidents handled relations with African-Americans.

West once accused President George W. Bush on live television of not caring about black people, and he openly criticised President Barack Obama, who repeatedly called the rapper a “jackass.” Trump, who has used vulgar language to disparage a number of majority-black communities and countries, has not been the subject of West’s critiques.

You don't have to agree with trump but the mob can't make me not love him. We are both dragon energy. He is my brother. I love everyone. I don't agree with everything anyone does. That's what makes us individuals. And we have the right to independent thought.

West has long appeared to be fascinated with the possibilities of the presidential platform: In 2015, he seemed to enjoy provoking the public into believing he was interested in a 2020 run. And in December 2016, after he was hospitalised for a “psychiatric emergency,” West visited Trump, then the president-elect, at Trump Tower in Manhattan. Hope Hicks, Trump’s spokeswoman at the time, said West had requested the meeting.

On Wednesday, the White House had no further details on whether the two had been in regular contact since then. “We’ve been friends for a long time,” Trump told reporters after the Trump Tower meeting. Asked what he and West talked about, Trump responded: “Life. We discussed life.”

The bond between the two and speculation over West’s mental health apparently alarmed his wife, Kim Kardashian West, who was a vocal supporter of the Clinton campaign and has openly criticised Trump’s handling of major events, including hurricane response in Puerto Rico.

Indeed, at his wife’s request, West walked back the full extent of his praise. “My wife just called me and she wanted me to make this clear to everyone,” he tweeted. “I don’t agree with everything Trump does.” On Wednesday, Kardashian West blamed “the media” for pushing the idea that her husband was mentally ill for supporting the president. “He’s a free thinker, is that not allowed in America?”

Kardashian West wrote. “Because some of his ideas differ from yours you have to throw in the mental health card? That’s just not fair.” Still, those in the rapper’s orbit expressed concern for his well-being because West’s online interaction with the president came as he acknowledged that he had fired his manager, Scooter Braun, and his lawyers, writing on Twitter: “I no longer have a manager. I can’t be managed.”

West had been working since 2016 with Braun, the powerful music industry figure behind Justin Bieber and Ariana Grande. Though he is no longer on West’s team, West kept the door open for him to return: “I’d like Scooter Braun to be a part of this new platform we’re creating,” the rapper tweeted Wednesday afternoon. “Scooter is a genius.”

Braun declined to comment. Last month, West parted ways with another member of his management team, Izvor Zivkovic, with whom he had worked since 2010. “I’m nobody’s ‘client,’” West said Wednesday on Twitter, explaining he had given his associates the option to work only with him full time or be let go. Responding to reports that called his behaviour erratic, West added, “Please never use the word erratic to describe a person who is economically and psychologically empowered.”

Howard E. King, a lawyer who has represented West in business and litigation over the past two years, said, “He notified us over the weekend that he appreciated everything we had done for him and he was taking all of his legal work in-house.” King added that his firm would continue to assist West “in any way that he wanted us to help.”

West’s recent flurry of activity followed more than a year of public silence since an episode in November 2016, when he was hospitalized. Just prior, while on a tour that would soon be cancelled, the rapper had begun expressing an affinity for Trump, and when he resurfaced the next month, it was to meet with the new president-elect.

Upon his return this month to Twitter, West announced that he planned to release two albums in June, in addition to at least three more upcoming releases he was producing for other artists. As the public was reeling from his tweets about the president, West was practicing free association on other topics, including a request to meet with Tim Cook, the chief executive of Apple, and his desire to see a “tour with Nikki Minaj and Cardi B,” misspelling the first rapper’s name.