‘Most important thing about drunks? They’re more intelligent than non-drunks’

Irish musicians in 38 quotes. The words of Shane MacGowan, Bono, Enya, Sinéad O’Connor and many more 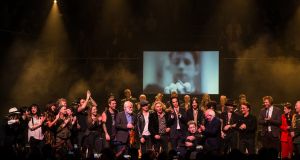 Bono, Sinéad O’Connor, Imelda May and many others watch President Michael D Higgins present Shane MacGowan with a Lifetime Achievement Award at the National Concert Hall in Dublin this year. Photograph: Frank Miller

The most important thing to remember about drunks is that drunks are far more intelligent than non-drunks – they spend a lot of time talking in pubs, unlike workaholics who concentrate on their careers and ambitions, who never develop their higher spiritual values, who never explore the insides of their head like a drunk does.
Shane MacGowan

I used to love Kurt Cobain, when he was telling people we’re a pop band. People would laugh, they thought of it as good old ironic Kurt. But he wasn’t being ironic.
Bono

I’m not reclusive. I just have a private life.
Enya

I was never fashionable anyway, in terms of image, or whatever. I had no image. When you see some of the early videos of me – the stuff on YouTube – the state of me! I mean, really.
Paul Brady

Love songs are the most complex to write because everyone knows about it.
Chris de Burgh

I learnt from Armstrong on the early recordings that you never sang a song the same way twice.
Van Morrison

Forty years ago, my life in music was substantially different to today. I went out every night with my guitar seeking a place to sing, a floor on which to lie, some love, some food, a lot of wine There was no business, no gigs, no questions, no PR, no recording. Life was simpler. I was poor and young and hungry. Today I am a lot more focused on The Song.
Christy Moore

Jamming is really the most awful, excruciating experience for me; I really don’t enjoy it.
The Edge

If there is any justice in the world, then eighties rock will never again serve to blight humanity as it did in that dark decade.
Vivian Campbell (Def Leppard)

It’s not like now where things are driven by money and greed . . . In the 1960s there was a real sense that singing about the world could actually change it.
Liam Clancy

Happiness, I think, only exists when you’re a child and once you go past 11, unfortunately it’s gone.
Andrea Corr

I pray constantly. I have an altar.
Mary Coughlan

I wouldn’t call myself an actor or a singer for that matter, just a journeyman.
Ronnie Drew

I can hold a note and I know I’m not ugly so, in ways, that’s enough
Keith Duffy (Boyzone)

U2 albums never get finished. They just get released.
The Edge

I was born a boy and remain one ever since. Friends and relatives often urge me to grow up and take an interest in politics, whiskey, race meetings, foreign securities, poor rates, options and other things that men talk about, but no - I am still the small boy messing about with a paint-box
Percy French

To me the rhythm is almost everything. It’s the hypnotic part of Irish music that takes you to another place.
Frankie Gavin (De Dannan)

If you want everything you write to be good, you will never write anything.
Lisa Hannigan

I don’t see how you get used to people screaming in your face, and anyone who says different is lying.
Niall Horan (One Direction)

I am a firm believer in God. I wouldn’t be running up and down to the church every day but I talk to God in my own way.
Dolores Keane

I think I write honestly about what goes on in a guy’s mind, and girls are interested in that. As a sex we are not the best communicators when it comes to talking about the women in our lives. I know I’m not – but I’m doing much better when I have a pen and paper in my hand.
Gary Lightbody (Snow Patrol)

Overcoming my Dad telling me I would never amount to anything is what has made me the megalomaniac you see before you today.
Bono

Anyone who’s mechanical is never a success. If you haven’t any emotion in you, you have no right being on the stage, trying to perform to the public. You couldn’t have any colour in your work if you were a static fella. You must be emotional.
Josef Locke

The heartbeat is probably where rhythm originated, but yeah, rhythm is one of my preoccupations, one of the things I love, and Irish music offers loads of opportunity for rhythm.
Donal Lunny

That’s the nice thing about being a live act. I can get the audience. It’s like, ‘Can I do this tonight?’ And you can see when people like you. But on record – and with the pen, it’s almost for all time. Really, a lot more thought has to go into it.
Phil Lynott

I live again the days and evenings of my long career. I dream at night of operas and concerts in which I have had my share of success. Now like an old Irish minstrel, I have hung up my harp because my songs are all sung.
John McCormack

I still get questions now, like ‘who writes your songs?’, which is unbelievable.
Imelda May

If I had to live again I would do exactly the same thing. Of course I have regrets, but if you are 60 years old and you have no regrets, you haven’t lived.
Christy Moore

I’m just following the Irish tradition of song-writing, the Irish way of life, the human way of life. Cram as much pleasure into life, and rail against the pain you have to suffer as a result.

Or scream and rant with the pain and wait for it to be taken away with beautiful pleasure….
Shane MacGowan

Music is spiritual. The music business is not.
Van Morrison

It’s a tough life being a pop star. You know, at the end of the day when you’ve paid all the bills and put the kids through college and that, there’s only enough for a small island in the South Pacific
Larry Mullen

I’m on fire when I’m singing. I’m completely in character. I use my sense memories, and every syllable is meant. It’s a very special thing.
Sinéad O’Connor

When I sing, it’s the most solitary state: just me, and the microphone, and the Holy Spirit. It’s not about notes and scales, it’s about emotion.
Sinéad O’Connor

Never judge someone, especially if you don’t know them, because you don’t know what they are going through. For all you know, your words could be the last thing they hear before deciding they have had enough.
Danny O’Donoghue (The Script)

You get older and come to the conclusion that it’s a great gig making music. Even if you turn into an old gnarly fart, no one cares what you look like if you write good songs. The only gig is to sing well and perform.
Dolores O’Riordan

I live as I choose or I will not live at all.
Dolores O’Riordan

From The Irish Musicians’ Quotation Book, compiled by Andrew Russell and published by Somerville Press (€4.99)