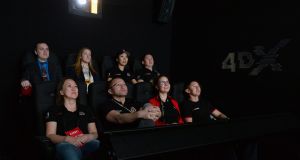 Cinemagoers experience 4DX. What will it do to those who’ve straightened their hair before watching 'Finding Dory'? Photograph: Bryan Steffy/Getty Images

Aaaaah! Cinema exhibitors are introducing one of those tricksy alterations to the viewing experience that indicates they’re panicked about some other medium.

This time the gimmick is a South Korean innovation called 4DX.

Back in the 1950s, when TV menaced, carnival hucksters like William Castle launched processes such as Emergo (a skeleton cranks across the auditorium), Percepto (fake electrical shocks) and Illusion-O (something involving cellophane) to keep the theatrical experience vital.

Twenty years later, as home video loomed, films such as Midway and Earthquake were shown in cinemas shaken by Sensurround.

Now we’re panicked about streaming. You like Netflix. Right? Netflix allows you to watch your favourite shows and the odd favourite film whenever you wish. No argument?

But answer me this. Does Netflix burst in and shake the couch violently when you’re trying to focus on the latest episode of Jessica Jones? How often has Netflix squirted water in your face during the wetter bits of Gilmore Girls? Can you count on Netflix to blow weird artificial smells in your face when Lost in Space turns explosive?

You say you don’t want any of these things? Well, I wouldn’t recommend going to see Avengers Infinity Wars in 4DX then.

The process has been around for some time. As far back as 2009, that version of Journey to the Centre of the Earth with Brendan Fraser was given the 4DX treatment in Korea. It took another five years before the first 4DX experience opened in the United States.

In January 2015, Kingsman: The Secret Service became the first film exhibited via Dampo-Shako-Smello-vision in the United Kingdom. This week, you can see the new Avengers movie in 4DX at Cineworld in Dublin.

The late David Foster Wallace once published a collection of essays entitled A Supposedly Fun Thing I’ll Never Do Again. I don’t know why I mentioned that, but, having viewed three trailers in 4DX, I will tentatively admit that it is something every film fan should experience for themselves. At least once. Only once perhaps. But you need to make up your own mind.

My biggest complaint with the current, now vanishing version of 3D – alongside dark screens, outrageous surcharges and uncomfortable glasses – is that, after the first five minutes, you tend to forget all about it. Your eyes adjust and, unless some character is firing tennis balls at you, the screen assumes the character of a gloomier flat version.

This will not happen with 4DX. The seat movement is not some gentle lilt. The rocking is sufficiently vigorous to tip your EnormoCola over anyone unlucky enough to be sitting towards the auditorium’s heaving bow.

Never mind Finding Dory. The possibilities for a 4DX screening of Fifty Shades of Grey are terrifying

Happily, we did not see trailers for Titanic or The Perfect Storm, but the sprays of liquid were substantial enough to leave visible splashes. Lord knows what it will do to those who’ve chemically straightened their hair before heading out to Finding Dory. The odours were relatively unobtrusive.

The weirdest parts of the experience are the blasts of air that comes at you from various directions. For the first few moments, while my head was tipped forward in squinting astonishment, I was aware of rushes that simulated hurtling movement.

Leaning back, I caught a sharp puff that suggested some lunatic blowing on my neck. Never mind Finding Dory. The possibilities for a 4DX screening of Fifty Shades of Grey are terrifying.

I would make a joke here about what exhibitors of that film could do, but, mindful that The Irish Times is a family paper, I’ll write something else instead.

The initial jolt of the thing is worth experiencing. After about 90 seconds, however, I turned to my colleague – whose hair had got no less curly in the damp haze – and remarked, with only a hint of facetiousness, that “the novelty has worn off”. Perhaps it works better when rationed out over a whole feature. I suspect you’ll need to tell me about that.

It’s true that cinema began as a carnival attraction. You paid a nickel and watched something outrageous happen for a minute or so. But even the producers of the brashest entertainment must, surely, worry about their films being turned into just one aspect of a ghost-train ride.

The publicity material boasts that it provides “a revolutionary cinematic experience which stimulates all five senses”. Does it? The air affects touch. The odour spurt plays with scent receptors. I suppose that involves taste as well.

But what about sight and sound? Oh, yes, that part of the “revolutionary cinematic experience” is the bit we know as “the film”. That can’t be what Welles, Bergman and Ozu had in mind. Blah, blah! Whither the language of Shakespeare? Blah, blah! Go out and kick a ball.

Joe Dante: You have to give a movie time to age, like wine
2

Britain and Europe in a Troubled World: A wise guide to Brexit
8