Una Mullally: Dangerous and grim for society to silence arts 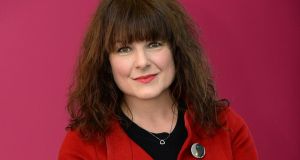 Comedian and author Tara Flynn was due with Emmet Kirwan, Elaine Feeney and Una Mullally to discuss an anthology about and issues around repealing the Eighth. However the event has been cancelled. Photograph: Cyril Byrne

On Friday morning, I stood outside the Amnesty Ireland office in Temple Bar watching the artist Maser paint his iconic Repeal mural on the side of the building, this time in yellow, the red one having been painted over on the wall of Project Arts Centre after the Charity Regulator intervened. We have a dire situation in Ireland right now where bodies such as the Charity Regulator are deciding what art is political, how it’s political, and when it’s acceptable.

The politics of art is something that could be debated forever. It’s about the politics. It’s also about what the art is saying, not whether it’s saying “something” or “anything”. Maser’s mural was obstructed first by planning laws, and then by the Charity Regulator. It’s about abortion. It’s about reproductive rights. It’s about women.

A Yes mural by the artist Sums One on the wall of Project Arts Centre during the marriage equality referendum campaign in 2015 faced nowhere near the level of opposition Maser experienced with his Repeal mural.

The politics of art is something that could be debated forever. It’s about the politics. It’s also about what the art is saying, not whether it’s saying 'something' or 'anything'

As I was watching Maser painting, another story was unfolding. I received a call from the programme director of the International Literature Festival Dublin (ILFD), a festival I was programmed in for an event called The Question of the Eighth on the back of my recently published best-selling anthology Repeal the 8th. At the festival, myself; the comedian and author Tara Flynn; the playwright, actor and poet Emmet Kirwan; and the poet Elaine Feeney were due to discuss the making of the anthology, protest art, how to write about the body and autonomy, the impact of the movement for reproductive rights on arts and culture in Ireland, and so on.

It was gearing up to be a great event. The festival programme was printed and distributed, and tickets were selling. It was an honour to have this book featured at the festival, alongside so many other great books and writers.

As with other public bodies, Dublin City Council cannot use public funding to support any side or appear to support any side of a referendum campaign. Council officials are also bound by the code of conduct for local authority employees to remain politically impartial. Scheduling this event as part of a council-funded festival was considered to be inconsistent with the obligations on the council and its officials.

Dublin City Council wishes to apologise to the event organisers and the patrons who have booked tickets and the writers invited to participate. Those who have bought tickets will be refunded.

My event was about a book. It was not a campaigning event. It was not a rally or a demonstration or a hustings. If I am said to be “taking a side”, then what does shutting down an event about a book look like? If there was an anthology out there by quality writers and artists such as the ones in my anthology that was reflecting Ireland from an anti-choice or religious point of view, and that had been scheduled at a literature festival, and a local authority shut it down, I would be equally outraged. We should not stop people using art to discuss our stories and our society.

My anthology features short stories, poetry, screenwriting, fiction, photography. The city arts officer, Ray Yeates, told me he hadn’t read the book, which is a shame, because the council seems to be cancelling a cultural event it does not know the content of. I would appreciate if people would be at least familiar with what they are seeking to shut down.

Interestingly, in 2015, the ILFD had an event around the lesbian love story graphic novel Blue Is the Warmest Colour which featured Ailbhe Smyth discussing LGBT rights and freedom of expression. This was seven days before the marriage equality referendum. Dublin City Council did not shut that event down.

So where is the line? Will Dublin City Council make other interventions if guests at the festival speak about abortion, reproductive rights or the referendum? Chimamanda Ngozi Adichie is one of main speakers this year. What if she mentions Repeal? Is the council worried what Ruby Wax will say at her event? Or Laurie Penny, who’s talk is titled Agency and Consent? Or Amanda Palmer, who in recent years while visiting Dublin played a free concert on the street outside a Well Woman clinic, voicing her support for women’s bodily autonomy here?

An entire year of publicly funded arts programming around the centenary of 1916 rejoiced in the revolutionary role of artists, poets and thinkers in our society. Well, it’s safe when we’re at a 100-year distance. This is the here and now. Artists must not be silenced. It’s a grim and dangerous society that does so.

1 ‘IRA has gone away’: McDonald responds to Garda Commissioner’s comments
2 A Dad with brain cancer: I was given 18 months to live, it put things into perspective
3 Drug dealer loses codes for €53.6m bitcoin accounts
4 Ireland Slam England at the Gardens to open up Grand ambitions
5 Woman found living in squalor with flies coming from blanket she was using
Real news has value SUBSCRIBE