Party will support Government’s proposition for abortion within first trimester 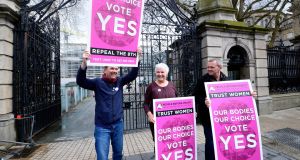 Any legislation that replaces the Eighth Amendment should not be reconsidered for a Dáil term, People before Profit has said.

The party launched its campaign to remove Article 40.3.3 of the Constitution in the forthcoming referendum on May 25th.

Every member of the party is canvassing for a Yes vote and its message is one of trusting women and giving them the choice, it said.

In the event the Eighth Amendment is repealed, the Government is seeking to introduce legislation that would allow for access to terminations within the first 12 weeks of pregnancy.

This does not mean the party wanted to see abortions “10 a penny” but wanted to ensure the termination of a pregnancy could be provided when it was needed, Ms Smith added.

The party will support the Government’s proposition of allowing for access to abortion within the first trimester of pregnancy and up to 24 weeks in certain cases.

Ms Smith said it would be an “amazing achievement” if this passed claiming politicians may seek to row back on this, even if the referendum is passed.

People before Profit would be “happy to live with” that position for the next Dáil term, Ms Smith added.

Those opposed to repeal the Eighth Amendment have said politicians cannot be trusted on this issue and will seek to change the law on a consistent basis.

Ms Smith said this was a ruse by the No side to encourage people into rejecting repeal.

The three TDs insisted the issue of the legislation was not coming up on the doorsteps, insisting the response was overwhelmingly in favour.

Many people felt this referendum was about their personal position on abortion but when the issue was explained to them, Dún Laoghaire TD Richard Boyd Barrett insisted they stated they would vote Yes.

They have been placed in inappropriate locations including outside schools, he added.

However, they had caused people to change their opinion and the subject and support a Yes vote, he claimed.

The party also insisted the Government must improve sexual education and access to free contraception.