Isle of Man could be set to decriminalise abortion 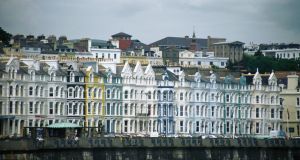 A view of the Isle of Man. File photograph: Getty Images

Change to the Isle of Man’s restrictive abortion laws could be just weeks away, the politician spearheading the reform has said.

A private member’s Bill going through the Tynwald, the island’s parliament, which seeks to decriminalise the procedure and make it available “on request” to women in a range of circumstances, will receive its third reading on Tuesday.

The Isle of Man is a self-governing crown dependency with a population of 88,000. Although abortion is legal in some limited circumstances, in practice it is such a difficult and lengthy process to obtain one that women instead travel to Britain and pay for the procedure at a private clinic.

The cost of the abortion, travel and accommodation can be as much as £2,000. Fewer than 10 abortions are carried out on the island each year, while about 100 women travel to Britain for private abortions annually.

Dr Allinson said he hoped the passage of the Bill would “right a wrong done to Isle of Man women for over 50 years”, as the island never adopted the UK’s 1967 Abortion Act. He said he hoped there would be no more delay in passing the Bill: “I’d hope we’re talking weeks, and maybe months, rather than anything more.”

The legislation will allow abortion up to 14 weeks without restriction, up to 24 weeks in cases of foetal anomaly or serious social reasons, and after 24 weeks in rare circumstances where the life of the mother is at risk.

Counselling must be offered before and after the procedure, and a clause would allow medical professionals to opt out of delivering treatment if it clashes with their personal views. The Bill legislates for “access zones” where patients would be shielded from “pavement interference” or harassment outside abortion providers.

Stephanie Kelsey, from the group, told the Press Association that she hoped the new Bill would be “held up as an example of progressive, yet caring legislation that other countries could copy”.

She said: “It will be a really proud moment for the Isle of Man, and for me personally, for a Manx woman, to be able to change something which has affected so many women negatively up until now, and which could really change women’s lives and also women’s perception of how the Isle of Man cares for them and feels about them.”

In recent years, the island has sought to distance itself from its conservative reputation. Homosexuality was only legalised in 1992, but under the former chief minister, Allan Bell, the Tynwald passed a marriage equality law in the summer of 2016 that went beyond Britain’s in terms of its civil partnership provisions.

“By passing progressive legislation, the Isle of Man can change its image,” said Dr Allinson. “I think a lot of people still feel that the island is slightly backwards and unusual. We’ve been late in adopting quite a lot of social policies. But the [abortion reform] Bill, if passed as it is, is far more progressive than the UK’s abortion legislation.

“It can make people aware that this quite small island in the middle of the Irish Sea actually is somewhere where it would be really interesting to live and work.”