Sally Rooney and Bernard MacLaverty shortlisted for the €100,000 prize 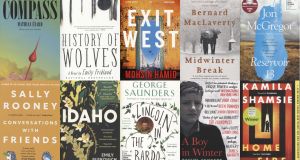 The 10 books shortlisted for the 2019 International Dublin Literary Award

The winners of the 2015 Prix Goncourt, the 2017 Man Booker Prize and last year’s Women’s Prize for Fiction are among the 10 novels shortlisted for the 2019 International Dublin Literary Award.

Compass by Mathias Énard, translated by Charlotte Mandell; Lincoln in the Bardo by George Saunders; and Home Fire by Kamila Shamsie are joined on the shortlist by two Irish titles, Conversations with Friends by Sally Rooney and Midwinter Break by Bernard MacLaverty, the 2017 Irish Novel of the Year.

Also shortlisted are books by two other veterans of the Man Booker 2017 shortlist, History of Wolves by Emily Fridlund and Exit West by Mohsin Hamed; Reservoir 13 by Jon McGregor, who won what was then known as the Impac prize in 2012 for Even the Dogs; A Boy in Winter by Rachel Seiffert; and Idaho by debut US author Emily Ruskovich.

The €100,000 prize, founded in 1994, is the world’s most valuable annual literary prize for a single work of fiction published in English. Sponsored by Dublin City Council and managed by Dublin City Libraries, it is designed to promote excellence in world literature.

“This is an award of which I, as Lord Mayor, am extremely proud, and I take every opportunity to talk about it when on my travels, as it is the very centrepiece of Dublin’s designation as a Unesco City of Literature,” said Dublin’s Lord Mayor, Nial Ring, patron of the award. “The egalitarian way in which books are long-listed, through public libraries worldwide, is to be commended in a world where sales figures can dominate the literary conversation so often. The beauty of this award is that it reaches out to readers and authors worldwide while also celebrating excellence in contemporary Irish literature – represented on the 2019 shortlist by Sally Rooney and Bernard MacLaverty.”

Last year’s hugely popular, home-grown winner was Mike McCormack for Solar Bones, published by Dublin’s Tramp Press. He said at the time: “It speaks something generous, eloquent and enquiring that Dublin City Council for so many years have put their resources, their weight, all their expertise behind this prize. It has huge international standing, it has a unique reach and a unique generosity and long may it live, it’s one of the shining jewels in this country’s crown.”

McCormack was the fifth Irish winner after Kevin Barry (City of Bohane, 2013); Colm Tóibín (The Master, 2006); Colum McCann (Let the Great World Spin, 2011); and Frank Wynne (translator of Atomised by Michel Houellebecq, 2002). This year, eight of the 10 Irish writers longlisted (John Banville, Roddy Doyle, John Boyne, Lisa McInerney, Sara Baume, Peter Cunningham, Alan McMonagle and Billy O’Callaghan) did not make the cut. However, MacLaverty’s late masterpiece about a middle-aged Irish marriage on the rocks (with whiskey) in Amsterdam and Rooney’s highly acclaimed debut, about two Dublin students’ relationships with an older couple, are both strong contenders.

Given that Rooney’s even more impressive second novel, Normal People, is almost certain to be among the favourites for next year’s prize, for my money this year’s award should go to MacLaverty or McGregor, whose Reservoir 13, a pastoral symphony with a family tragedy at its heart, still haunts two years on.

“The titles on this year’s shortlist were nominated by public libraries in Barbados, Belgium, Canada, Czech Republic, France, Germany, Hungary, Iceland, Ireland, Norway, Spain, Sweden, Switzerland, the UK and the USA,” said Dublin City Librarian Mairead Owens. “The novels come from France, Ireland, Pakistan, the UK and the US. Memorable characters tell stories of identity and displacement, violence and war, family, relationships and loss, set in both familiar and unfamiliar countries and cultures.”

Of the shortlisted authors, Hamid received the most nominations (11), followed by Saunders (nine), McGregor (six) and MacLaverty (five).

While 39 novels in translation spanning 16 languages featured on the typically epic 141-strong longlist, it is striking that Énard’s Compass is the only translated work to feature on the shortlist of a prize that once rivalled the Man Booker International as a champion of works in translation. In 2017, A General Theory of Oblivion by Angolan author José Eduardo Agualusa, translated by Daniel Hahn, was the ninth translation to win in 23 years.

It is the two-year time lag, however, between the year the novels are published and the one in which the prize is awarded, which somewhat diminishes the international impact of what is a remarkably generous and prestigious prize. The many honours already bestowed on the novels that make up this shortlist are testament both to its strength and its weakness.

Nominations are invited from more than 400 libraries in major cities in 177 countries worldwide. But at present nominations only open in February/March and close in May. By bringing forward the deadline to the end of the year of publication (few significant novels come out after early October) this would enable the prize to be awarded in the year many of the contenders will be released in paperback, making it feel more current.

It would also make the longlist, which is effectively a list of nominations, more manageable if the rules were amended to require nominations from at least two countries. This would actually emphasise the international aspect of the prize and avoid the 50 shades of embarrassment of longlisting titles such as Darker by EL James, nominated by Bridgetown, Barbados.

Óró…: This immersive production is a feast for the senses
4