George Saunders’s first novel focuses on the death of Abraham Lincoln’s son Willie. Despite its highly original conceit it’s his most straightforward fiction 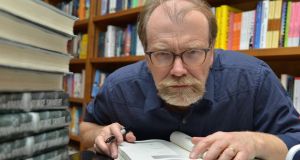 George Saunders: the characters in his novel reside in the graveyard where Abraham Lincoln’s son Willie is buried

Book Title:
Lincoln in the Bardo

This is George Saunders’s first novel, and it has been thirstily anticipated. Since his debut collection of stories, in 1996, his blend of satire, sentiment and linguistic sensibility has made him one of the most acclaimed short-fiction writers in English.

He is a literary celebrity: his last collection, Tenth of December, was published with a 20-page introduction, and the audio book of this novel will be narrated by Julianne Moore, Ben Stiller, Don Cheadle and more. Yet his strong style means a little of his work goes a long way, and at times Tenth of December, with its familiar stew of pathos and managementspeak, reads like self-parody.

The language in Saunders’s stories is intense, with little breathing space. He admires sentences that have “been the subject of so much concentration, they [have] become a thing in the world.” So 350 pages of uninterrupted Saunders might be exhausting. Fortunately, it isn’t: Lincoln in the Bardo is a breeze, although that is not an unqualified compliment.

The story takes place on February 25th, 1862, in the cemetery in Washington DC where Willie Lincoln, 11-year-old son of Abraham, has just been buried, following his death from typhoid. He is surrounded by other dead spirits who talk directly to the reader, and the book is written entirely in dialogue intercut with extracts from historical accounts (many real but some invented).

The babble of graveyard voices sounds a lot like Máirtín Ó Cadhain’s much-praised (and twice-translated) Cré na Cille (The Dirty Dust/Graveyard Clay), but Saunders’s novel has its origins in a play that he tried unsuccessfully to write “for about nine years”.

Our main narrators are Hans Vollman (“not thin, somewhat bald, lame in one leg, teeth of wood”), who died after being crushed by a beam, and Roger Bevins III, who killed himself after his male lover abandoned him in order to “live correctly”. Both are 20 years dead but believe themselves simply to be unwell, their cemetery a “hospital-yard” and their coffins “sick-boxes”. They are, like others whose voices come and go through the novel, dead but not yet at peace.

This is where the title comes from. In Tibetan Buddhism bardo is a transitional state, between death and rebirth into the next life. Willie is the Lincoln in the bardo, but Abraham Lincoln is in a transitional state too, grieving for his son and leading his country during an unpopular civil war. Lincoln now is considered a great president, but the contemporaneous commentators quoted by Saunders don’t have the benefit of hindsight. The same narrow vision infects the tellers of our story, who are dead but cannot accept it.

What turns their lives – deaths – upside down is Lincoln’s arrival at the cemetery to cradle Willie’s body. “The unkempt gentleman was fussing over the small form now, stroking the hair, patting and rearranging the pale, doll-like hands,” Bevins reports.

Willie shares his father’s words to him: “You were a joy, he said. Please know that. Know that you were a joy. To us. Every minute, every season . . . you did a good job. A good job of being a pleasure to know.”

Seeing one of their kind touched, loved, by a living person has an electrifying impact on the community of the dead: “We were perhaps not so unlovable as we had come to believe.” This simple sincerity is moving, and Saunders blends it smoothly with other registers: the comedy of the foul-mouthed Barons (“Those f-ing ingrate snakes have no G-ed right to blame us for a f-ing thing until they walk a f-ing mile in our G-ed shoes”) or the pathetic innocence of Elise Traynor, whose hope for affection that “would become Love, and Love would become baby, and that is all I ask” ended in gang rape.

The rest of the novel is driven by a slender plot in which Bevins and Vollman try to persuade Lincoln (who can’t hear or see them) to return to Willie before he is permanently lost. Here we are reminded of the difficulties of loving in a world where our beloved must die: “These and all things started as nothing . . . but then we named them, and loved them, and, in this way, brought them forth.”

Much of Saunders’s work shows how people use words to obscure rather than explain, and his language is typically compact and coded as a result. In Lincoln in the Bardo people say what they mean, so, despite the highly original conceit, this is the most straightforward fiction he has written. Its looseness means it is easy to read, but it feels attenuated, at 350 pages less weighty than the best of his stories.

Leave it to George Saunders always to surprise us, showing us here that a book can be at the same time a delight and something of a disappointment.