Arabs, A 3,000-Year History review: Too narrow in its focus 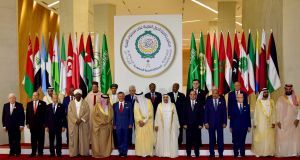 This is a sad book. Tim Mackintosh-Smith is a distinguished scholar of Arabic language, literature and culture, and a long-term resident of war-torn Yemen. He writes with passion in the midst of bombs and violent protest. Yet at the heart of his book is the paradox that the essence of the Arab existence is discontinuity and confusion, rather than unity and cohesion.

And at the heart of that paradox is another: that the one distinguishing feature of Arab identity, language, is in fact “a forked tongue”, a “slippery diglossia” which is innately divisive.

The author is sometimes close to saying that it is this dichotomy which prevents any lasting Arab unity. The word for unity, sha’b, is also the word for division and separation. But, as Mackintosh-Smith indicates, two languages, the “high” Arabic of literature and the Koran, and demotic, live side by side and often in contention. Greece, too, suffered this in all aspects of public life until 1974, when “high” Greek, or “katharevousa” was removed from its official status and replaced with demotic – how people actually speak. Arabic still suffers from this disability which bedevils the development of a sense of identity.

Unity implies “the gathered word” and herein lies an oxymoron: words will not obey the summons to cohere. “It attracts but inevitably repels,” the author tells us. While “unity” seems to be “something right and proper, something natural”, no one seems able to say how that can be achieved.

Mackintosh-Smith is at pains to point out that Arabs are essentially nomadic or transhumant peoples, not given to husbandry. The most viable definition of “Arab” is “tribal groups who live beyond the reach of settled society”, which tends to make its entire culture foreign to western, linear rational procedures. Another definition of an Arab is “someone whose language is Arabic and who lives in an Arab-speaking country”. This suits the nomadic quality of life with its disregard for borders, but not the democratic norms of a “settled society”.

One of the great debates has concerned the “modernisation” of the Arab world (meaning “westernisation”) through democracy, commerce and urbanisation, which inevitably mean departures from traditional identities.

We are told repeatedly that Arab and Islam are not synonymous – that the Arab mind and world predated the advent of Islam. But Islamic culture provided “Arabic information technology” in the form of writing and printing, “new ways to use and control language and thus to shape identity”. The Koran insists on “high” Arabic while it also acknowledges that people who are by nature rootless predators cannot live by that language. At one point he admits that “freedom of speech” is incompatible with “high” Arabic as established in the Koran.

The French and British contest for naval supremacy in the Mediterranean from 1800 onwards, followed by the need to control the Suez canal, led to the first of many “Arab awakenings”. French and British connivance and double-think in the Sykes-Picot agreement of 1916 and the Balfour Declaration of 1917 contributed largely to the modern conflict in Palestine, since they guaranteed the same territory to both Jews and Palestinians.

The brokering of the Camp David agreement in 1979 and the Oslo Accord of 1993 was futile in that it represented the west trying to resolve the discord between Jews and Arabs. And the case of the Irish boy Ibrahim Halawa, languishing in an Egyptian prison for four years, is an example not only of a miscarriage of justice but of an east-west misunderstanding due to cultural, linguistic and legal differences.

The author abandons any claim to balance when he declares “the Israelis have graduated from throwing bombs to the more civilized method of dropping them”. Israel, like Isis, may have overstepped the border between civility and chaos in recent years, but to label it, as does Mackintosh-Smith, as an “aggressive and provocative neighbour” is to ignore the wars of 1948, 1967 and 1973, instigated by Israel’s own “aggressive and provocative neighbours”.

I remember in the 1967 Six Days’ War, when the Arab nations attempted to destroy the state of Israel which they surrounded, King Hussein of Jordan declaring (of the Jews): “They will be our enemies until the end of time.”

The author is long on quotations from Arabic sources but short on their wider context. Thus he cites George Antonius’ The Arab Awakening of 1938 but he might also have mentioned Antonius’ sister-in-law, Amy Nimr, a painter who belonged to the “Art and Liberty” group of surrealist painters in Egypt (which was also associated with the novelist Albert Cossery). The group was one of the cultural dimensions of modern Egypt which might have strengthened his illustrations of the east-west split in mindsets.

The Copts, too, are almost entirely ignored as a force in the political evolution of modern Egypt. B L Carter’s The Copts in Egyptian Politics (1986) would have amplified his account of Egypt as the key to the Arab future.

The absence of David Fromkin’s A Peace to End All Peace (1989), Philip Mansel’s magisterial Levant (2010) or Robert Fisk’s The Great War for Civilization (2005) seems odd. So too does that of Naguib Mahfouz among Arabic literary figures, or Ahdaf Soueif’s In the Eye of the Sun. While Taha Hussein is mentioned, his The Future of Culture in Egypt (1938) deserves consideration. There is no mention of André Aciman – surely his Out of Egypt should be assessed, while, among the classic texts, Robin Fedden’s books on Egypt and Syria also merit at least a passing mention.

These oversights suggest that the author’s agenda has been so narrowly focussed on elucidating the essential nature of Arab identity through the ages that it has preferred not to take a wider perspective on the controversial and multicultural hinterland of his subject. Moreover, the endnotes are so impenetrable as to disaffect the enquiring reader.

One feels deep sympathy for a man who can write, “Seeing the land I live in and love falling apart is like watching an old and dear friend losing his mind” and suffering “a slow considered suicide”. I couldn’t agree more: living in Greece inflicts the same unhappy emotions.