Longlisted for the Man Booker prize, this nuanced examination of the place of Muslims in a hostile world will infuriate some readers and win the hearts of others 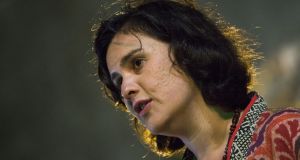 Kamila Shamsie: Home Fire has been longlisted for the Man Booker prize

There’s a line of dialogue in the opening chapter of Kamila Shamsie’s seventh novel that is as perceptive as any I’ve read this year. “It must be difficult to be Muslim in the world these days,” remarks Eamonn, the son of the British home secretary to Isma, a young woman with whom he has struck up a friendship. “I’d find it more difficult not to be Muslim,” is her reply, summing up not only her feelings towards her religion but also her strength of character in refusing to accept such generalisations, particularly when the prejudices of so many have been inspired by the actions of so few.

Home Fire, which has been longlisted for this year’s Man Booker Prize, is a novel about family loyalty, the manipulative power of sexuality and the place of Muslims in a world that regards them with suspicion. The novel opens with Isma struggling to be admitted to the US on a student visa and being trapped for so long in an interrogation room that she misses her flight, a daily reality for Muslims doing nothing more than going about their daily business.

Isma, however, is the daughter of a dead Jihadist and has been on MI5’s watch list since her teenage years, as have her younger twin siblings, the beautiful, intelligent Aneeka and the aimless, malleable Parvaiz. She is a stoic, however, recognising the futility of challenging a system that punishes dissent, and while the novel is rich with political commentary, Shamsie avoids falling into didacticism, preferring to reflect racial attitudes in a tempered fashion than craft a lengthy essay on injustice.

The structure of the novel adds to its success, with five long sections, each of which features one of the book’s protagonists at its core. Isma, Aneeka and Parvaiz are at the heart of three and through their experiences we’re given an insight into life as a young Muslim in contemporary London. Of the siblings, Isma is the least interested in her heritage, perhaps because of her father’s crimes, wanting nothing more than to pursue her PhD in peace.

Parvaiz, however, is an unfocused young man whose lack of ambition and general ennui leaves him easy to corrupt. His drift towards Isis is well depicted and a scene in which his father’s torture is replicated on him as an example of the barbarism of the West is both difficult to read and painfully authentic. Readers might be surprised by his response to such violations of the body and mind; rather than running as far from his tormentors as he can, he finds himself hungry for more.

The other two sections, featuring a father and son, are equally impressive. Karamat Lone, the home secretary, has turned against his fellow Muslims in his ambition to be prime minister, regularly condemning their refusal to conform to British ways. It would be easy to write him as utterly self-serving but Shamsie crafts a portrait of a more complex man, one who loves his wife and children deeply and who, when accused of hating his own kind, offers another terrific line: “I hate the Muslims who make people hate Muslims”. And it is his son, the sensitive, handsome but entitled Eamonn – “an Irish spelling to disguise a Muslim name, Ayman… so that people would know the father had integrated” – who draws the entire novel together through his individual connections with each character.

If there is a minor note of discord in the novel, it lies in the use of newspaper articles and inflammatory headlines to tell a crucial part of the story. While impersonating the hackneyed style of tabloid writers – “Pervy Pasha’s twin sister engineered sex trysts with home secretary’s son” – Shamsie runs the risk of sounding hackneyed herself, like an impressionist trying just a little too hard. But this scarcely detracts from her remarkable skills as a storyteller, one who never allows the rhetoric to turn into sermonising. Her characters are multifaceted, their actions unpredictable, particularly in the latter stages of the novel when Parvaiz’s decisions threaten harm for all.

Figures of authority are frequently shown in a sympathetic light, their own moral dilemmas on display, and in doing so she avoids cliché. Such authorial decisions turn Home Fire into a provocative work which will inspire the admiration of many but may at the same time infuriate readers expecting a more black and white depiction of terrorists versus non-terrorists, Muslims versus non-Muslims, the role of the state versus the rights of the civilian. It takes a brave writer to tackle these subjects in such a nuanced fashion and a fearless one to recognise that there is enough blame for all parties.