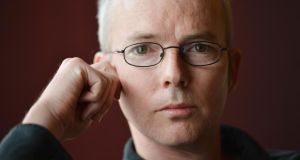 Jon McGregor: Even by the standards of his mature work, Reservoir 13 is a remarkable achievement. Photograph: Alan Betson

‘Ordinary things,” the novelist Marilynne Robinson once remarked, “have always seemed numinous to me.” Jon McGregor may not share Robinson’s preoccupation with the divine, but few writers have more consistently affirmed the luminous dignity of the everyday.

His debut novel, If Nobody Speaks of Remarkable Things, took as its subject an unnamed city street and the inner lives of its residents. Panoptic and quietly rhapsodic, it seemed to announce his intentions in its very title. “If you listen, you can hear it,” the book began. “The city, it sings.”

And sing it did. There was no shortage of beauty in this early work, although its painterly effects at times eclipsed its characters, presenting not so much human interactions as exquisite tableaux vivants.

McGregor has long since learned to temper these excesses, honing his lyrical gifts and yielding the foreground to his characters. His growing stature has not gone unrecognised. Longlisted twice for the Man Booker Prize, he won the Impac Dublin Literary Award in 2012 for Even the Dogs. Even by the standards of his mature work, however, McGregor’s latest novel is a remarkable achievement.

Set in an unnamed town in the English midlands, Reservoir 13 seems at first to tread familiar ground. A young girl has gone missing, and in the darkness of a midwinter morning the search is beginning. “It was cold and there was little conversation. There were questions that weren’t being asked.”

The missing girl, Rebecca Shaw, had been on a family holiday and formed only a few tenuous friendships. In the photograph that is circulated her face is “half-turned away”. She is remembered as “Rebecca, or Becky, or Bex”, an elusive and prismatic presence in the town’s collective consciousness. Most people hardly knew her, but rumours are repeated. Stories are told. Spring arrives, and still Rebecca has not been found.

Life goes on. It is a comforting truism, something we tell ourselves in the aftermath of shocking or inexplicable events. Yet to a writer of McGregor’s particular gifts the banal can present invigorating challenges. Life does go on, undeniably, but how? How do we absorb events like these, and how do they alter us?

To answer these questions McGregor returns to the broad social canvas of his first novel, but his undertaking here is far more ambitious. The author himself posted a partial dramatis personae on Twitter that ran to 80-odd entries. Many are recurring characters, not fully developed in the usual sense, but skilfully realised nonetheless. They emerge in glancing encounters, the narrative’s perspective slipping unobtrusively among them. The effect is cumulative and subtle, leaving us with a precisely calibrated sense of familiarity. These are people we might see on the school run or speak to while queueing at the post office. We can only glimpse their inner lives, guess at their secrets.

At times the narrative drifts apart from human company altogether, pausing to observe the foraging of fox cubs or to mark some small increment in the progress of the seasons: “The sun cut further into the valley and under the ash trees the first new ferns unfurled from the cold black soil.” Descriptive writing of this kind is often praised for its arresting beauty, yet these passages are remarkable precisely because they do not halt the reader’s momentum.

Indeed, McGregor’s prose throughout this novel is as near to faultless as makes no difference. Fluid and fastidious, its sparing loveliness feels deeply true to its subject. There are moments, as in life, of miraculous grace, but no more than that.

There is beauty, likewise, in the moors and in the beech woods that surround the town, but this is no mere idyll. Here too the life that persists is driven by animal necessity. Unfledged blackbirds are taken by crows. Goldcrests feed in the churchyard yews. We see summer’s end and winters encroach again. The missing girl is spoken of still, as the years pass. There are occasional “sightings”, though these are no longer taken seriously. She recedes in the town’s memory but never quite vanishes.

It is a mark of greatness in a work of art that its effects, although profound, are not easily accounted for. Reservoir 13 is not a conventional crime novel, and its central mystery is more than just a procedural puzzle. We do not come to know Rebecca Shaw, but we feel in the end that her life has been given a solemn and particular weight, its traces documented until they are too faint to be seen. In her absence the swallows come and go. People marry or move away. There are moments of sadness, of squalor, of indelible beauty. Look, this humane and tender masterpiece is saying. This is what becomes of us. This is what remains. Life goes on.

Paraic O’Donnell is author of The Maker of Swans