A brief, polemical fable that puts the reality of the refugee crisis into sharp relief 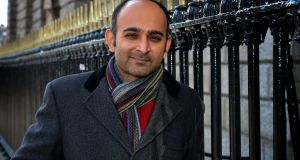 They appear to be the most unlikely lovers; Saeed lives with his parents and believes in tradition, while Nadia is independent – swears, rides a motorbike and wears a burka to ward off men. Only she does not put it as politely as that. Nadia is tough, streetwise and, at least initially, difficult to take seriously.

Moshin Hamid, born and raised in Pakistan, was educated at Princeton and Harvard. He became internationally famous with his second novel, The Reluctant Fundamentalist (2007), a novel which seemed to owe an overwhelming debt to Albert Camus’s classic The Fall (1957). Yet Hamid’s eloquent narrative, drawing on the aftermath of the 9/11 terrorist attacks, possessed sufficient originality to acquire a life of its own and was deservedly shortlisted for that year’s Man Booker Prize.

Now with Exit West, his fourth novel, he further consolidates his position as a writer of our times. It is a brief, polemical work with a vast theme: displacement, and the ongoing human tragedy of the international refugee crisis. As he writes early in the narrative, “. . . when we migrate, we murder from our lives those we leave behind.”

Random observations merge with the deliberate message. At times it appears about to edge towards the dystopian and, in the hands of Margaret Atwood, mordant humour would have seeped through the pages. But Hamid is deadly serious: his mood is intended to convey turmoil and his young lovers inhabit a world closer to that envisioned by JM Coetzee or Jim Crace than to that of Atwood’s wry vision.

The love affair progresses tentatively. The more gracious Saeed wishes to delay physical intimacy until marriage, but Nadia is in a hurry. Neither of the lovers emerges as fully developed characters. Hamid is interested in their plight, not their personalities. The contrasting facts of their lives are presented as important: Saeed is a traditionalist, Nadia is a maverick.

Everyday existence has been continuing within restrictions. But the situation is about to worsen. An expected curfew has finally been imposed. Violence becomes a reality. “War in Saeed and Nadia’s city revealed itself to be an intimate experience, combatants pressed close together, front lines defined at the level of the street one took to work.” Unreality takes over as people disappear and chance decides fate as much as politics. Saeed’s mother is killed by a “stray, heavy-calibre round” when she goes out to her car to search for a missing earring.

This sudden death causes Nadia to move in with Saeed and his grief-stricken father. The couple decide it is time to flee, yet the old man refuses to leave the place where the spirit of his wife remains. Nothing will change his mind. He later summons Nadia and entrusts her with the safety of his son. It seems a strange role-reversal, with a father asking of a future daughter-in-law what one might expect a mother to be requesting of an intending son-in-law. Saeed and Nadia’s leave-taking is symbolic. They depart through a door. Nadia is struck by “its opacity, the way that it did not reveal what was on the other side . . .”

The story of Saeed and Nadia has been enacted thousands of times. They are among the lucky ones, in their increasing misery and dramatic falling out of love. Safety, albeit a compromised one, does not equate with happiness. Saeed wants to move on. “Why?” Nadia demands to know. “To be among our own kind,” he replies. But that is insufficient for Nadia, who quizzes him about what this means, and when he says “they’re from our country”, her response is chilling: “From the country we used to be from.”

Eileen Battersby is Literary Correspondent. Her debut novel Teethmarks on My Tongue is published by Dalkey Archive.