Pilita Clark: The idea that women are happy to let men lead is increasingly hard to believe 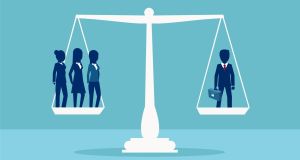 Last week I met a man who mentioned a side of the #MeToo movement that does not receive as much attention as it ought to: the money side.

Dan Nardello used to be a federal prosecutor in his native New York. Today he runs a global investigations agency he founded in London 16 years ago that ferrets out information on anything from a Wall Street bank to a Russian kleptocrat.

After nearly 30 years in the private investigation game, he says no other social shift has affected his business as much as the surge of sexual misconduct claims triggered by the Harvey Weinstein scandal that erupted in October 2017.

“We’ve seen an enormous uptick in this area for our services,” he told me, explaining his firm has been handling an average of about one #MeToo-related matter a week for more than a year.

That includes a £1 million (€1.1 million) case a couple of months ago, when a large law firm hired his agency to vet the entire board and top executives at a publicly listed company who feared a dirt-digging attack by one of the activist investors rattling the corporate landscape.

Investigators had to look into all sorts of potential skulduggery but the driver was concern about #MeToo, and it was not the highest fee his firm has raked in for work on such misconduct.

Two things struck me about what Nardello said. First, the huge cost to business, and second, his idea about one change that could help fix the problem: putting more women in the executive suite. “If you put women on more boards and more C-suites, you are going to see the incidence of #MeToo decline,” he said.

This would not fix everything. His firm has had a handful of cases where a female executive was accused of acting inappropriately with a male underling. But there are signs that companies agree with his prescription.

Women entered the boardroom at a record rate last year in the US. Figures compiled by the Heidrick & Struggles executive search firm showed 40 per cent of the 462 newly appointed board members in Fortune 500 companies were women, more than double the share a decade ago. The firm said a mix of factors probably caused the rise, including pressure from investors and customers, but the #MeToo movement might have played a role too.

Either way, the increase is overdue. Women only accounted for 22 per cent of overall board positions, and the pipeline of senior female executives in the US and abroad remains feeble.

This is baffling considering a new piece of research from the Zenger Folkman leadership consultancy that looked at thousands of 360-degree reviews of people in leadership positions, mostly in the US.

It found women were not just rated as highly as men but thought to be slightly more effective in 17 out of 19 areas, including the ability to take the initiative, inspire others and lead boldly. The two measures on which men outscored women were the capacity to develop a strategic perspective and technical or professional expertise.

Could the results have been skewed by the types of leadership qualities measured? Perhaps, though the researchers say the 19 qualities were based on the assessments of more than 120,000 leaders and are similar to those used by other organisations that try to determine the best ingredients of good leadership.

So why don’t we see more female leaders? The idea that women are happy to sit back and let men do all the leading is increasingly hard to believe, especially in a year when six female Democratic party candidates are vying to replace President Donald Trump, a record for a major US political party.

So are hiring decisions still biased, unconscious or otherwise? Or do women hold themselves back by being more reluctant than men to go for promotion unless they think they are totally qualified? There is evidence suggesting both those factors can play a role.

Ultimately, it is probably best to remember that when it comes to picking a new executive, organisations should think twice before rejecting a qualified woman. She may have only applied because she knows she is more than able to do the job – and she is very unlikely to cost a small fortune in private investigator fees any time soon. – Copyright The Financial Times Limited 2019