Pilita Clark: What the office toilet can tell you about your workplace

The real office throne: Why the most private room in the office can influence bottom line 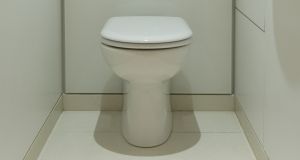 For the past two months I have stopped doing something at work that I thought I would do for ever. I no longer flush the loo.

Nor does anyone else in the swanky refurbished London office building the Financial Times moved into in May. We can’t, there is no button to push. There isn’t even one of those sensors you can activate with the wave of a hand. Instead there is another type of detector device that craftily calculates when a flush is needed and delivers it with no apparent human intervention.

This is just one newfangled feature in an office full of sit-stand desks and kitchen taps that produce sparkling, still or boiled water. We also have those fancy Toto toilets with heated seats and water jets: we are owned by Japan’s Nikkei media company. But none of this has provoked as much discussion as the self-flushing nature of the loos.

“They’ve got a mind of their own,” spluttered one colleague the other day, voicing a common concern about the difficulty of knowing exactly when the automatic sensor will kick in, and the lurking fear it might not. The hunt for the non-existent flush button has proved especially troublesome: one colleague pulled on a promising looking red cord and was appalled to discover it set off an alarm and flashing lights. Another pushed what she thought might be the right button and got a faceful of jet-sprayed water.

These are the sorts of things that only happen once and, as office dilemmas go, they are small. So why do we care so much? How can a simple bit of automation cause so much restroom unrest?

I have always thought the office toilet was more important than one might think and last week I found some research that backs up my hunch. Some years ago, researchers at the University of California, Berkeley and Portland State University looked at what workers in 192 US offices said when they were asked to offer a general comment about their personal work area or building. As expected, basic creature comforts ranked highly. People fretted about unpredictable air-conditioning temperatures, boring cafeteria food, poor light, too few places to buy coffee, irksome noise and slow lifts.

But the top issue mentioned was none of these. It was restrooms, specifically ones that were dirty, smelly, too far from desks, had low water flow or what the study called “issues with paper products”, such as overstuffed towel dispensers.

The researchers admitted these comments might seem irrelevant or trivial. “But a restroom is a basic comfort and typically the most private place at work,” they said. “It appears to be both a magnet for complaints as well as a nexus for judging the thoughtfulness of architects and designers, maintenance personnel and the organisations that employ them.”

This makes sense to me, and perhaps to Donald Trump as well. After the US president moved into the White House, the New York Times reported he loved to give tours of the building to visitors and had “an odd affinity for showing off bathrooms, including one he renovated near the Oval Office”.

Our instinctive interest in such matters supports another theory I have that much can be learned about an organisation from its restrooms.

The loos in the swish building that green billionaire Michael Bloomberg built for his eponymous media group in London use a vacuum system like those in an aircraft. Waste is whooshed away with air and far less water than a typical toilet requires. Down the road at Westminster, loos are widely shared democratically by MPs and staffers alike, though a report last week on bullying in the House of Lords cited claims of a “feudal” culture where some lavatories were designated for peers’ use alone.

The opulence of some restrooms can also prove tricky. As my colleague, Patrick Jenkins, reported last month, when the new chairman of Barclays bank, Nigel Higgins, formally took up his new role, he lost little time shrinking the grand corner office of his predecessor, John McFarlane. A meeting room was carved out of part of it and the future of its private bathroom looked grim until it emerged that the renovation could be “self-defeatingly costly”. All of which goes to show that when it comes to this most private of rooms, you can never lose sight of the bottom line. – Copyright The Financial Times Limited 2019