Telling the truth may not always be the best career move 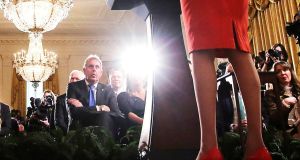 Britain’s former ambassador to the US Kim Darroch listens to Donald Trump and Theresa May at the White House. Being candid in the line of duty can be a dangerous occupation for an ambassador. File photograph: Carlos Barria/Reuters

Being candid in the line of duty can be a dangerous occupation as Britain’s top ranking diplomat, Sir Kim Darroch, recently found out. Very often the truth hurts and telling it like it is may be a luxury your career cannot afford.

People who are too aggressive when making their views known are likely to upset their peers and superiors and damage their promotional prospects while those who are too passive may struggle to achieve their career objectives.

Holding your tongue when you’re bursting to have your say is very difficult but, before you let fly, it pays to know your “enemy”, choose your battles and get your timing right. Speaking out may not work in your favour if your opinions are too controversial. This alienates people who switch off before you have had time to explain why you’re taking this position.

It also won’t do you any good if you get your timing wrong and appear foolish. Thirdly, expressing your opinion forcefully to a colleague or manager known for their inability to handle criticism or accommodate other points of view is never going to end well.

However, this doesn’t mean that the best answer is always “yes” or that the smartest option is to run a mile from expressing an opinion. Holding a contrary view is difficult because humans are hard-wired to respond better to people or ideas that agree with their viewpoint. But organisations pay employees and managers in particular to have different opinions, views and ideas. This divergence is often the springboard that sparks creativity and fuels innovation so it’s important it’s heard. But the context is all-important, especially when people disagree.

The most effective organisations are those in which people regularly disagree about strategy or goals but where speaking out is considered something positive and constructive conflict a matter of professional courage.

As author and former CEO Margaret Heffernan puts it: “The sad truth is that, as the CEO, you mostly don’t know what’s going on, because no one will tell you. You have to cultivate and cherish the people who do. The biggest problems that we face mostly don’t come from information that is secret, or hidden: it comes from information that is freely available out there, but we are wilfully blind to because we don’t want to handle the conflict that it provokes.”

In well-functioning teams with leaders who are comfortable in their own skin, getting it off your chest is either encouraged or at least tolerated and, once it’s over, it is forgotten. People are mature enough to see it for what it is and to move on, especially if the team leader enforces the “play the ball not the man rule” and doesn’t let the disagreements become personal.

Indeed, that should be the basic ground rule. Where it is enforced, it’s far more likely that teams will think together as a unit with each person’s “truth” seen as no more than part of the thinking and teasing-out process and mistakes as something to learn from not to be buried.

However, more often than not, frank discussions go pear-shaped because they’re mishandled and expose someone’s vulnerabilities or insecurities – perceived or real. They may also get derailed if they challenge someone’s control or question their competence or judgment.

Doing any of these things, particularly in public, is storing up trouble especially if the individual concerned is the type to wait in the long grass and next time you need backing, they retaliate by remaining mute or actively opposing you. In short, it’s never wise to underestimate the urge people have to get even.

While there is very little you can do to prepare for dealing with an unexpected spat – apart from physically walking away and not allowing it to escalate at that point – it is possible to be candid or to express a strong opinion if you frame it right. This involves cultivating the middle ground of assertiveness where you can make your point without being overbearing or bending someone to your will by verbal force.

Assertiveness is a bit like walking a tightrope and all about striking a fine balance between saying your piece without being aggressive or dogmatic. It’s a skill that can be learned and it improves with practice as you get better at honing the “why” and putting things more hypothetically,which distances the disagreement and makes it less personal.

“The truth won’t set us free until we develop the skill, the talent, and the moral courage to use it,” Margaret Heffernan says. “Openness isn’t the end, it’s the beginning.”

Tips for telling the truth without losing your head

The tone of the interaction is key. Keep it calm and quiet.

Avoid trigger words and phrases such as should, but, you always, he/she never...

Present your differing point of view based on reason not emotion.

Come at things from a problem-solving perspective.

When you challenge, offer an alternative or be able to show how elements of the original idea could work if modified.

If you ask enough questions to ascertain why someone is thinking as they are, it may give you insights that change your attitude to what they’re saying.

Have your say, let others have theirs. Agree to disagree.

Domestic economy may get boost from multinationals 07:25
Government restores hope to the tourism and hospitality sector 07:22
Tesco to cut emissions by converting waste food from Irish stores to gas 07:16
Why is Germany suddenly embracing its inner Keynesian? 06:28
Irish stocks gain on Government’s accelerated reopening plans 19:37

1 Why is Germany suddenly embracing its inner Keynesian?
2 Major credit union plans to limit savings accounts to €40,000
3 Tesla’s Elon Musk calls for breakup of Amazon in tweet
4 Passengers face queuing in car parks at Dublin Airport
5 Tesco to cut emissions by converting waste food from Irish stores to gas
6 Brother is dragging his heels as executor of uncle’s will - is there anything I can do?
7 Land dispute between Citywest Hotel owner and neighbours before court
8 Avoca wins battle with Monkstown locals over cafe operation
9 Ikea among major retailers to reopen next week
10 Penneys will not reopen on Monday despite expected changes to lockdown rules
Real news has value SUBSCRIBE