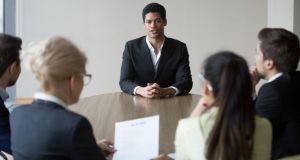 The business case for blind recruitment is strong: there is a proven link between diversity and positive financial performance. Photograph: Getty Images

Having spent time in prison won’t necessarily get you a job at the UK multinational retailer, Timpson, but it won’t stand in your way either. About 10 per cent of the company’s workforce have “a past”.

For many employers, a criminal record would be a red flag on a CV but Timpson is big on social responsibility and it refuses to be a slave to the resumé. It knows the sort of personality that suits its business and that’s what it looks for first in a potential employee, not at what it says on their CV.

And, as a result the company has above average retention rates in a sector notorious for high staff turnover.

Traditional CVs are a pretty blunt instrument, little more than a snapshot of a person taken at a point in time. Some are underplayed while others are works of fiction, yet the first few lines can be enough to turn an employer on or off a candidate.

Up to now there has been little appetite to ditch them despite their shortcomings. However, the rapidly-evolving diversity and inclusion agenda may rattle their cage as narrowly-framed CVs are anathema to a genuinely representative workplace.

One of the ways of levelling the pitch is with blind recruitment, which removes key information such as name, age and educational background from a candidate’s CV before it’s given to the hiring manager. This changes the emphasis and puts the focus on skills and experience, not on unrelated factors such as ethnic background or where someone was educated.

The aim is to remove bias and while no one is naive enough to think that there can’t be conscious or unconscious bias later in the selection process, it at least makes it more likely that there will be a better mix at the beginning.

The business case for blind recruitment is strong. There is a proven link between diversity and positive financial performance. According to a 2018 McKinsey report, companies with executive-level gender diversity outperformed their industry peers on both short-term metrics and longer-term value creation.

The human case for blind recruitment is equally strong as, at its simplest, it stops someone being excluded because a recruiter can’t pronounce their name and feels embarrassed about it. It cuts through prejudices around age and ethnicity as well as assumptions around intelligence if a candidate comes from a particular school or university.

Lastly, it avoids OKP (our kind of person) groupthink whereby a recruiter identifies favourably with a candidate because of shared hobbies, interests, social background or the same alma mater.

One of the biggest criticisms levelled at the corporate world in general and tech companies in particular is their lack of diversity. This is attributed to the fact that they predominantly hire in their own likeness. In response, the practice of blind recruitment is gaining momentum although it’s still in its infancy.

Mike McDonagh, managing director of recruiter Hays Ireland, says about 20 per cent of Irish companies have dipped their toe in the water with the introduction of the first step in blind recruitment, name-blind applications. “

“Business leaders here need to increase their commitment to the process because our 2018 diversity and inclusion report shows that 72 per cent of job candidates will only consider applying to an organisation if they have a public commitment to diversity. That’s significant in the context of a tight labour market,” he says.

McDonagh says that, when Hays is hiring for itself, it doesn’t introduce a candidate’s CV until round four of the interviews. However, the companies it works for are less progressive: most still want to be presented with a sheaf of CVs to kick off their selection process.

“You actually get a much better-quality interview if you go in knowing very little about a candidate, because you have no assumptions and it forces you to ask more probing questions,” McDonagh says.

“Blind interviewing is also changing the emphasis and moving hiring away from competence-based to strengths-based assessment,” he adds. “Yes, there may be a cost to an organisation to go this route as it requires a different way of managing candidates’ information, for example, but the benefits outweigh the investment.

“There may also be a bit of a ‘hearts and minds’ battle with managers to convince them to change their approach. But if an organisation is seen to be serious about diversity and tackles it from the top down and the bottom up, then those in the middle will feel the ripple effect.”

A first step in launching blind recruitment within an organisation is to remove names from application forms. This can then be followed by the introduction of a basic template that focuses on skills, work experience and other relevant requirements for a role.

Candidates get assigned a number and the hiring manager can see at a glance how each person’s skills and experiences stack up. This information is then used to decide who should move to the next stage where broader issues such as work ethic, attitude and cultural fit can come into play.

Blind recruitment is not a panacea. There is no guarantee that it will achieve diversity goals and it can slow down selection as it takes time to anonymise people’s data. That said, it’s a potentially useful tool that can help overcome some of the subjective flaws inherent in human judgment.

1 Why are markets booming when a crash is on the way?
2 How much do Irish people earn? And what will Covid-19 do to our wages?
3 Drumcondra credit union collapses as merger plan fails
4 Government deficit balloons to €5.3bn on back of Covid spending
5 Could your old car be giving away all your secrets to its new owner?
6 Permission sought for €150m film and media campus in Wicklow
7 Dunnes Stores trials online ordering from Cornelscourt outlet
8 Judge urges Claddagh Jewellers family to try to resolve their differences
9 Innovation hubs keen to get show back on the road
10 Supreme Court rules ‘substitute consent’ inconsistent with EU environmental law
Real news has value SUBSCRIBE