Belfast overtakes Dublin as a better place for women in business 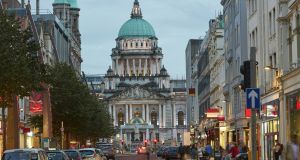 Aside from being leapfrogged by Belfast, Dublin ranked behind a plethora of European cities including Munich, Berlin, Barcelona, Amsterdam, Stockholm and London which remained in third place

Belfast has overtaken Dublin in a survey that assesses a city’s ability to foster growth of businesses owned by women.

The Women Entrepreneur Cities Index, published by Dell Technologies, found that Belfast jumped eight places to 28th in a survey of 50 cities while Dublin rose four places to 30th.

Dell’s report ranks cities based on characteristics including access to capital, technology, talent, culture and markets. The overall rating of a city is based on 71 indicators in total of which 45 have a gender-based component.

Aside from being leapfrogged by Belfast, Dublin ranked behind a plethora of European cities including Munich, Berlin, Barcelona, Amsterdam, Stockholm, and London which remained in third place.

Globally, the San Francisco Bay Area outranked New York for the number one spot largely because of the ease with which women can access capital there. The worst performing cities were Delhi, Jakarta and Istanbul.

Nevertheless, the report showed that San Francisco still has work to do given it scored just 63.7 out of a possible 100 points.

Lack of funding, the high cost of living, low representation of women in leadership roles and the lack of government-led policies supporting women entrepreneurs were seen to be among the barriers globally.

When Dublin ranked 34th in 2017, it received a score of 36.2. Areas of improvement flagged at that time included a reduction in the city’s high cost of living. It was also flagged that the high costs of childcare should be addressed. No such explanation of its 2019 score was offered.

In any event, based on 2019’s results, Dell recommended that improvements be made primarily in access to financial and human capital, seen as the main challenge women entrepreneurs face.

1 Passengers face queuing in car parks at Dublin Airport
2 Woodchester founder Craig McKinney dies
3 Brother is dragging his heels as executor of uncle’s will - is there anything I can do?
4 Tesla’s Elon Musk calls for breakup of Amazon in tweet
5 Ikea among major retailers to reopen next week
6 Ryanair to process all Covid-19 refunds within 10 weeks, Michael O’Leary says
7 Major credit union plans to limit savings accounts to €40,000
8 Covid-19 mortgage breaks: What’s the catch?
9 Angela Merkel sweeps in to save the euro zone
10 Getting home insurance wrong could prove costly
Real news has value SUBSCRIBE