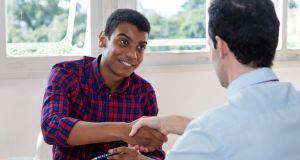 One of the characteristics of the Generation Z workforce is that they want their work to count for something.

Be careful what you wish for. That’s the advice, in paraphrase, of Richard Haxby, managing director of MathWorks, the US-based mathematical computing software company that employs 86 people in Galway.

MathWorks set up its Irish operation at the very end of 2016 and, since arriving, Haxby has spent a lot of his time conducting job interviews as the company has ramped up. He sees candidates at least once a week and, as a result, has built up a good picture of what younger workers expect from their first job and are looking for from a potential employer.

One of the patterns he has noticed is a heavy emphasis on short-term career goals with little or no awareness of how this might limit opportunities later on.

“The younger candidates tend to arrive with a preconceived idea of what they want. For example, they want to have achieved their first promotion within so many months or to be a manager by the time they’re 25,” Haxby says. “The bit they’re missing is what they need to do in terms of personal development to reach those milestones and have good long-term prospects.

“Having career aspirations is only one side of the equation and we try to explain to them that if they work on their skills – identifying what they’ve already got and what they need to develop – then the career opportunities will take care of themselves.”

Employers typically focus on employee development because the more competent people become, the better equipped they are to do more added-value work and assume more challenging roles within an organisation. The business case for investing in employee development is that it makes for a more competitive workforce with better engagement and improved retention.

Employees, on the other hand, often prefer to focus on career development because they see it as the fast track to promotion, a higher salary, more perks and better job prospects.

What Haxby is saying is that the two are not exclusive but can go hand in hand.

And he has some sage advice for those just entering the workforce or looking to move on from their first job. “The key questions they should be asking a potential employer is not ‘How fast will I be promoted?’ but ‘How will you invest in my personal development? Are there opportunities for learning new skills? Can I build a sustainable career here? Does my work contribute to innovations for the greater good and do you give back to the community?’,” he says.

Freshly-minted graduates and mid-twentysomethings have formed the lion’s share of applicants to MathWorks, although the company also has roles for more experienced staff and those returning to the workforce after a career break. The company develops products for use by engineers and scientists so it mainly looks for candidates with a primary degree as a basic entry requirement, although the discipline is not important per se. Its Irish workforce is roughly split in three between local employees, those from outside the Galway area and those from outside Ireland.

At its simplest, Haxby is gently saying that workplace newbies still have a lot to learn and that organisations should encourage them to see this through training, coaching and mentoring programmes.

“Young candidates often come in with a high level of expectation and the assumption that things are going to happen within a very specific time frame,” he says. “If they hold on to this view, it’s highly demotivating for them if they don’t happen, so some of the early conversations around explaining this to them can be quite difficult.”

“I try to steer the conversation much more toward drawing them out about what interests them – hobbies or volunteering, for example – and how we can leverage this to develop their capacity to grow into roles and take on responsibility,” he says. “One way we do this is to explore how their interests and hobbies can intersect with their job roles.

“In fact, talking about their interests in initial interviews leads to very active interactions where candidates forget their nervousness and allow their enthusiasm to shine through, especially when they realise they will have the support of a larger ecosystem here.”

As a concrete example of this, Haxby mentions an employee who is very involved with the CoderDojo volunteer initiative that teaches children how to write code.

“We offered him the opportunity to secure certification on our Matlab Grader product which allows him to review students’ success at learning the curriculum,” Haxby says. “Giving him access to this learning management system has accelerated his focus on offering individualised instruction and is also allowing him to engage more students, more effectively.”

One of the characteristics of the Generation Z workforce is that they want their work to count for something. For them, contributing to the greater good is highly motivating and companies that can tick this box are ahead of the posse when it comes to hiring.

“Many candidates are attracted by the satisfaction that comes from working for companies that contribute to advancing the overarching pace of innovation,” Haxby says. “So, they should be looking for evidence that this is the sort of company they’re joining and that it’s also one that will encourage them to succeed in their role, advance them in their career and contribute to their personal growth.”