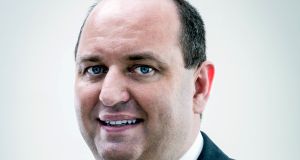 Sean O’Driscoll of iNua Hospitality: ‘I think tourism is one of the sectors in Ireland that is most match-fit in dealing with the Brexit challenge.’ Photograph: Keith Wiseman

Sean O’Driscoll is the chief operating officer of iNua Hospitality, a hotel group that operates four and five-star hotels, including the Muckross Park Hotel in Killarney, Co Kerry, the Kilkenny Hibernian Hotel and the Tullamore Court Hotel.

Established in 2012, the company has since grown to have a portfolio of eight properties, including four hotels that trade under the Radisson Blu brand in Athlone, Limerick, Cork and Sligo.

British visitors represent less than 5 per cent of tourists staying in iNua hotels. And British visitors don’t travel far from the airport. The one area of concern is their effect on the domestic economy because obviously we rely a lot on domestic business. We’ve always been very focused on diversifying the business mix.

The kind of hotels we’ve purchased are a mix of hotels and we do corporate, international tours, conferences and weddings and have leisure centres and spas. Our strongest international markets are the US, Canada, Germany, France and Spain. We’re also seeing growth from the Middle East.

How much do you rely on raw materials or markets north of the Border? And how much on Britain?

We do get business from Northern Ireland. We’ve a property in Monaghan and a hotel in Sligo which would get a lot of Northern business. Our strategy is to continue to diversify those businesses. When we purchased the Hillgrove, it was very reliant on the North so we’ve gone about changing that. We knew that the hotel wasn’t really known in the South so we set about marketing the hotel in the southern counties.

The hotel wouldn’t previously have gone after the corporate market so we went about readying it for that. Where other hotels are reliant on tourists from one market, we try to diversify that.

We’ve been preparing for the past 18 months. Nearly all our food and beverage now comes from the Republic. We’re lucky in that we have scale; it’s much more challenging for independent hotels.

The Government decision to increase VAT on food and accommodation is very challenging for small seasonal tourism businesses around the country whereas having the benefits of scale has dampened the effect of the VAT increase.

We’re looking at new international markets all the time and Tourism Ireland has done a great job at diversifying our strategy. We’ve recognised that the Irish market is too reliant on British visitors. We’ve had fantastic growth from Canada and there’s exciting things happening in Europe with the Spanish and Italians travelling more.

In individual hotels, when we purchased some of them, there were markets they weren’t active in and we’ve spent about €13 million in capital investment in these hotels.

I don’t know if anyone can be fully Brexit ready but I think we’ve made our preparations as a business in terms of procurement and on our sales strategy side.

There’s still an unknown factor that we’ll have to deal with when we know what the final deal looks like. We feel the future is bright for tourism in Ireland because we’ve worked very hard as a sector to develop those new markets for Ireland over the past 10 years.

How might the Government help ease the pain of Brexit for your company or sector?

Review the increase in the VAT rate. I think the timing was atrocious for businesses. It was based on a shortage of hotels in Dublin at the time but I think it was a hammer blow for rural Ireland where the tourism season is often no longer than four or five months.

You’re going to see a lot more tourists from the Asia-Pacific market coming into Europe. I think flight access will open into that market and, as a sector, we need to prepare for that. They have very different dining requirements and it’s about adjusting our product.

Germany and France were traditional markets but you’re also going to see more Spanish and Italian tourists coming in. Even for the domestic market, our capital spend is on segments where we feel there’s growth. We’re investing in our gyms in response to what consumers are looking for and trying to be ahead of the curve.

I think tourism is one of the sectors in Ireland that is most match-fit in dealing with the Brexit challenge because we’ve been diversifying our market for the past 10 years.