Itic says revenues from tourists could grow to over €8.1bn by 2025 if ‘correct action’ is taken 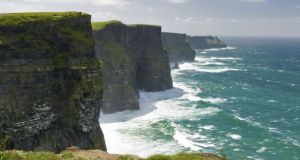 The Cliffs of Moher in Co Clare, one of Ireland’s most popular tourist destinations

The main umbrella lobby group for the tourism industry has accused the Government of lacking ambition for the sector.

The Irish Tourist Industry Confederation (Itic) on Tuesday published its eight-year strategy for the sector. The plan suggests that revenues from overseas visitors to Ireland could grow by 65 per cent to more than €8.1 billion by 2025, “if the right policies and investment strategies are... pursued”.

The report contains 40 recommendations, including the building of new hotels, capacity expansion at Dublin Airport and increased State investment to drive revenues in the sector, which already stand at record levels.

“Irish tourism is Ireland’s largest indigenous industry and is at a key juncture,” said Maurice Pratt, the chairman of Itic. “Correct actions need to be taken now to ensure that the sector’s significant potential is to be achieved.”

He said the €8.1 billion target is “significantly more” than the State’s €5 billion national tourism policy target.

“The Government must match the industry’s ambitions and commit appropriate funds to overseas marketing and new product development...”

Eoghan O’Mara Walsh, Itic’s chief executive, said he was disappointed at tourism’s allocation of €300 million in the recent National Development Plan, “out of an envelope of €91 billion”.

“There are many options to add to Ireland’s tourism experiences, but the State must be proactive and take the first steps,” he said.

Itic is calling for an extra €50 million annually for the State’s tourism marketing and development agencies. It also wants the Government to call a National Tourism Day, which it said is marked in other countries including the United States and Canada.

“It is high time that Ireland elevated tourism within the national debate,” said Mr Pratt, the former Quinnsworth retailer and C&C executive who later became involved with the tourism industry through B&B Ireland.