Ireland's second-largest hotel group, Tifco, on the market for €600m 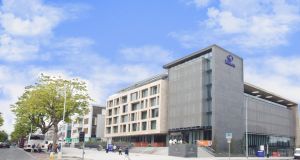 The Hilton Hotel in Kilmainham is owned by Tifco. The group also manages Clontarf Castle

Ireland’s second-largest hotel group is going on the market in a deal that is likely to be worth up to €600 million.

The company also manages a number of other high-profile hotels around the State, including the Clontarf Castle in Dublin, the Heritage Resort at Killenard in Co Laois and the Metropole in Cork.

The value of the portfolio has not yet been disclosed but is understood to be between €500 million and €600 million. The final asking price will be determined, in part, by the future timing of outstanding construction projects.

Tifco is the State’s second-largest hotel operator behind the publicly listed Dalata Hotel Group and operates more than 1,800 bedrooms in Ireland. The hotels it manages for others involve just under 800 rooms.

In its most recent results, for 2016, Tifco reported pre-tax profit of €4 million, a rise of 22 per cent on the previous year on revenues that jumped 10 per cent to just under €35 million. However, those figures don’t include the 12-strong chain of Travelodge Inns that Tifco acquired in late 2016 in a deal understood to be worth €46 million.

Goldman Sachs first got involved with Tifco when it bought the company’s debt from IBRC in 2014. It took a controlling stake in the business in a subsequent restructuring. The company’s founders – businessmen Aidan Crowe and Gerry Houlihan, the founder of DID Electrical – retain minority holdings in the group.

Mr Houlihan’s family are the owners of Clontarf Castle.

The Tifco sale will include the 204-bedroom Crowne Plaza Hotel at Northwood, Santry, near Dublin Airport, as well as Crowne Plaza hotels in Blanchardstown and Dundalk.

Other hotels in the group include the 114-bedroom Holiday Inn Express at Northwood and the 120-bedroom Hilton Hotel at Kilmainham.

Of the Travelodge properties, seven will be sold as freehold properties, with Tifco’s leasehold interest in the other five also part of the transaction.

The successful bidder for the hotel portfolio will also have the right to pre-fund a 392-bedroom hotel at Townsend Street, in Dublin. Another site at Portobello has planning permission for 150 bedrooms.

The collection will also include the Parliament Hotel on Lord Edward Street, which is currently closed and undergoing a multimillion euro expansion and refurbishment before being relaunched as Dublin’s first Hard Rock hotel.

Aside from the Clontarf Castle, the Heritage Resort and the Metropole, hotels managed by Tifco for other owners include the Hotel Killarney and Inishfallen Hotel in Kerry, Cork Airport and Cork International hotels, and the Athlone Springs hotel.

Hotels in Dublin – where 10 of the Tifco properties are – have been trading strongly over the past five years, with occupancy levels rising from 76.5 per cent to 83 per cent. Revenues per available room increased over the same period by 69 per cent to an average daily rate of almost €137.

Ownership of most of the major hotels in the Dublin area have changed hands in recent years, with a high proportion of them being bought by either foreign-based hotel groups or overseas investment funds.

The group has appointed Eastdil and CBRE as selling agents, but neither was available for comment.