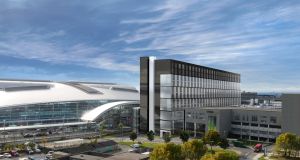 Dublin Airport operator DAA is restaging the tender process for the development of a four-star hotel at Terminal 2 after a “tight planning window” meant it was not possible to conclude the original tender launched in late 2016.

The winning bidder for the project, which is estimated in the tender documents to have a value of €100 million, will need to obtain new planning permission for the hotel.

There is planning permission in place for a 402 bedroom, 11-storey hotel on the site, located in the space between Terminal 2 and the T2 multistorey short-term car park.

However, this permission is due to expire in March 2019 and under its terms, the bidders would be obliged to complete the project before then.

It is understood that parties interested in the original tender were not willing to go ahead because there is no legal definition of what is meant by completion in planning permission, meaning the project could run into complications if there were unforeseen delays.

The DAA said it expected there would once again be interest in the competitive tender for the design, construction and operation of what will become one of Ireland’s largest hotels.

“The DAA went to the market in relation to this project in late 2016 and there was significant interest from a number of parties. However, it proved impossible to conclude an agreement due to the tight planning window,” a spokesman said.

“This is one of the best locations in Ireland for a hotel and DAA is expecting strong demand for this opportunity from both domestic and international groups.”

It is expected that the new planning permission will be similar to the existing one, although it is possible that bidders might seek to adjust the size of the hotel, perhaps by proposing additional storeys.

The ownership of the hotel, which is one of many expected to open in the Dublin area over the next few years, will transfer back to Dublin Airport at the end of a 100-year term.

It was expected at the time of the first tender that the project would employ 150 people during an estimated 18-month construction phase and that the hotel, once opened, would employ 250.

The DAA is currently appointing a property agent to liaise with interested parties, who are being asked to contact the airport operator through the eTenders website no later than April 11th.

The project comes amid record levels of passenger numbers at Dublin Airport, which grew 6 per cent in 2017 to 29.6 million. Short-haul traffic grew 4 per cent to 25.3 million last year, while the number of people flying long distances rose 19 per cent to 4.3 million.

About 27.8 million people began or ended their journeys at the airport, and another 1.8 million used it to transfer between European and transatlantic flights.