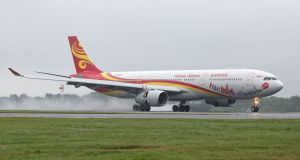 There will be four Hainan Airlines flights per week originating in Dublin, with two non-stop to Beijing and two stopping in Edinburgh before continuing to Beijing.

China’s Hainan Airlines will begin the first direct flights between Beijing and Dublin from June in a move set to give a significant boost to trade and tourism ties between Ireland and the world’s second-biggest economy.

The direct route was announced by Tánaiste and Minister for Foreign Affairs Simon Coveney, who is in Beijing as part of a St Patrick’s Day visit to China to promote trade links.

Mr Coveney said the flight would prove “transformational to the bilateral relationship between China and Ireland”.

“These flights have come about thanks to enormous effort from the Irish embassy in Beijing and Tourism Ireland. They have massive potential to expand both tourism and business between Ireland and China,” Mr Coveney told The Irish Times.

Mr Coveney said the direct flights, which will start on June 12th, would also provide a major boost to trade, as they would allow Chinese financial services and technology companies gain access to the Irish market.

“Already four of China’s top five banks have a presence in Ireland’s world-leading aviation leasing sector. For Chinese investors, Ireland is a perfect base within the European Union and the euro zone,” he said.

The route will initially involve four Hainan Airlines flights per week originating in Dublin, with two non-stop to Beijing and two stopping in Edinburgh for a short stopover to pick up additional passengers before continuing to Beijing.

“Hainan’s new Dublin-Beijing route links not just our two capital cities, but also our two counties. It is great news for tourism and trade and this improved connectivity will create new jobs throughout Ireland,” Mr Harrison said.

Tourism Ireland estimates that about 70,000 Chinese visitors came to the island of Ireland last year, up from 60,000 visitors in 2016.

China is the world’s largest outbound travel market, and one of the fastest-growing, with trips from China predicted to grow to 200 million per year by 2020.

Establishing a direct flight has been seen as a major part of Irish efforts to boost trade with China.

Trade between Ireland and China has more than doubled since 2013 to an estimated €15 billion in 2017. Most of that increase comes from Irish exports, and Ireland is one of only three EU countries with a trade surplus with China, in both goods and services.

Hainan Airlines applied to the Civil Aviation Administration of China earlier this year for permission to operate flights between the two capital cities starting in the summer.

The Tánaiste has been visiting China since the weekend. He arrived in Beijing from Shanghai, where he met local government officials and the Irish community. He has also been to Hong Kong, where he addressed the Hong Kong Foreign Correspondents Club and met Hong Kong chief executive Carrie Lam, and Shenzhen where he visited the Huawei Technology Exhibition Centre. Huawei has R&D centres in Cork and in Dublin.

Hainan Airlines is owned by HNA, the financial services-to-aviation company which bought Irish aircraft leasing company Avolon in 2016 for €2.25 billion, in a deal ultimately worth nearly €7 billion. HNA has recently struggled with a mounting debt problem and has been trying to raise cash.