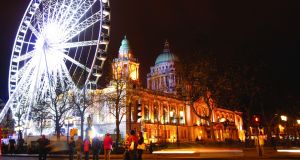 Belfast City Hall: the city council has said it had not entered into any formal discussions about Floral Hall with any investor or developer but would be keen to see it restored

The Liverpool-based hotel and property development group Signature Living is bidding to buy one of Belfast’s iconic landmarks, the Floral Hall, in a potential £5 million investment project.

Lawrence Kenwright, chairman of the Liverpool group which is developing the George Best Hotel, the Lanyon Hotel in the former Crumlin Road Courthouse and the Waring Hotel in Belfast, wants to restore the Floral Hall or, as it is known locally, “Belfast’s Ballroom of Romance”, to its former glory.

Mr Kenwright intends to announce his bid for the Floral Hall at the MIPIM property conference in Cannes on Tuesday during an event designed to promote Belfast as an investment location.

The Floral Hall was built in the mid-1930s, and is owned by Belfast City Council. It has been closed to the public since 1973 and is in a run-down state.

Mr Kenwright claims to have fallen in love with the building and its history, and wants to restore it as an entertainment, conference and wedding venue.

Belfast City Council has said it had not entered into any formal discussions about Floral Hall with any investor or developer but would be keen to see it restored.

Mr Kenwright is part of a delegation of 80 people from the private and public sectors who will be taking part in 15 events at the MIPIM conference in Cannes to promote Belfast as investment location.

A special electric DeLorean DMC-12, restored and modified by Queen’s University, has been driven more than 1,300 miles to Cannes to highlight the city’s “reputation for world-class talent and technological innovation”.