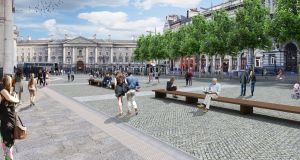 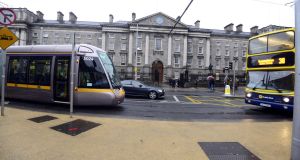 College Green as it is now.

Taxi fares in Dublin city could increase by 25 per cent if the proposed civic plaza development at College Green proceeds, according to mobile taxi hailing application MyTaxi.

In a submission to An Bord Pleanála ahead of an oral planning hearing regarding the project next week, the company suggests the restriction of taxis at College Green would hinder public access to certain parts of Dublin.

MyTaxi, which carried 3.8 million passengers in the final quarter of last year, called the proposals “anti-competitive” and suggested they would affect retail spending, damage tourism and increase traffic congestion in parts of the city taxis are diverted to.

The taxi firm’s concerns were shared by retailers and restaurants in the area with Flairline Fashions, the company behind the women’s clothing brand Pamela Scott saying it was concered that customers “will be dissuaded from ever coming into the city to shop”.

“As it is we have seen a huge decline in footfall in the city centre of the last 10 years or so,” it noted in its submission, which added that the firm had lost one in three customers in that period.

“Dubliners find their journeys to and through the city centre made longer and more complicated by the imposition of a traffic free College Green, they will be further discouraged from shopping in the city and will be bound to favour the easy access offered by shopping centres on the fringes of the city.”

A group including the Porterhouse Brewing Company, The Oak bar & restaurant and Zaytoon restaurant argued in a joint submission that the plaza would ultimately be “reminiscent in its character to that of Smithfield being broad, windswept, empty and devoid of activity”.

Hanaohoe Solicitors, on behalf of the group, suggested the effect of diverted traffic on Parliament Street would be “profound” noting “the sheer numbers traversing the street on an hourly basis”.

They said the congestion would render the entirety of the street “incapable of any reasonable use, impossible to continue to live on and destroy the amenities, prosperity and potential of these businesses and residents”.

Private bus operators, represented by the Coach Tourism and Transport Council (CTTC), were slightly less damning of the plaza itself and called the concept “desirable”.

However, it said a coach and bus ban would have “long term implications, negatively impacting on accessibility of leisure travellers to access the key tourist hubs in the locale” which could prompt them to choose to visit other international capitals.

A wide range of businesses and lobby groups in the city have previously complained about the proposals including Tesco, Dublin Chamber, the Shelbourne and the Westin hotels, retailers Arnotts and Brown Thomas and the Restaurants Association of Ireland.

The oral hearing on the plaza is to take place next Monday.