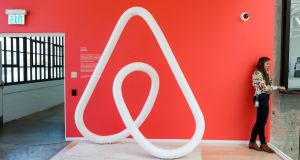 Airbnb is concerned that the guidelines would restrict families from renting apartments in the Republic. Photograph: Gabrielle Lurie/Reuters

Ireland’s planning guidelines for short-term lettings make it an unaffordable destination for families, Airbnb has said.

In a document sent to Dublin City Council on November 9th last year, Airbnb outlined a raft of concerns over a circular sent by the Department of Housing, Planning and Local Government in October.

The circular reminds local councils of existing rules requiring landlords to apply for change of use permission if they wish to let out their properties on a short-term basis.

Airbnb said the department’s guidance had “potentially wide-ranging implications for those sharing their homes”, and noted the “lack of clarity within the guidance is likely to cause concern and confusion for Ireland’s home-sharing community”.

One of Airbnb’s concerns was that the guidelines would restrict families larger than four people from renting apartments in the Republic, forcing them to book multiple hotel rooms instead. That move “will make Ireland an unaffordable destination for many”, Airbnb added.

The American short-term letting focused company said these measures put at risk the €4,900 typical host earnings for “local families”, €169 million in spending of Airbnb guests in local businesses and the €273 million generated for the local economy.

In addition to adding extra costs to visitors, documents obtained by The Irish Times show Airbnb told Dublin City Council the guidelines would “restrict regular families’ ability to earn a little extra income to help pay their bills and afford their homes”. This move “could have serious consequences on the affordability of cities like Dublin”, it said.

It compared the Irish situation with that in London or Paris where the requirement to apply for change of use is triggered only after an annual nightly limit is reached. In London it’s 90 nights per year while in Paris it’s 120 nights.

“This creates an unnecessary administrative burden for both councils and residents, potentially resulting in thousands of planning applications, and will likely generate significant additional costs and resources for councils to enforce, which will be levied against taxpayers in Ireland,” Airbnb stated.

While the circular suggested many positive impacts stemming from homesharing, it signalled concerns that online platforms may encourage landlords normally providing residential rental accommodation to tenants to move to short-term letting in order to achieve higher returns.

A Department of Housing working group, established in June 2017 to develop guidance in relation to planning applications relating to short-term letting, is currently finalising a report it had been due to bring to the Minister in December. “The Minister will consider its recommendations before initiating a targeted public consultation on the proposals,” a department spokesman said.

Airbnb has been active in the Irish market since 2009, a year after its establishment. In a submission to an Oireachtas committee examining the impact of short-term lettings on Ireland’s housing and rental market, it said 5,200 people in Dublin city hosted at least once during 2016. The typical Dublin host earned €5,000 in 2016 and hosted for 51 nights, it told the committee. During 2016, there were 3,838 “entire home” listings in Dublin.