Belfast gets ready for record number of cruise ships 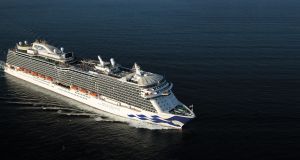 The Royal Princess cruise ship, which will be the largest vessel calling at Belfast Harbour this year.

Belfast is hoping that blue skies and a jump in the temperatures are on the horizon as it gets ready to welcome a record 117 cruise ships bringing more than 200,000 visitors to the North this year.

The harbour is expecting to host 25 per cent more ships this season compared to last year.

Eight new cruise operators have added Belfast to their itineraries and the cruise season has also been extended to mid-October, developments which could help boost passenger and crew visitors numbers by an additional 50,000 in 2018.

According to Mary Jo McCanny, director of the visitor information body Visit Belfast, the city’s reputation as a travel destination “couldn’t be better” thanks in part to recent positive reviews from guides such as National Geographic Traveller and Lonely Planet.

Leading operators including Carnival, Royal Caribbean and Cunard all now include a stop in Belfast on their itineraries but the city is also proving to be a draw with the “exploration and adventure” ships which cater for the luxury cruise market.

Michael Robinson, Belfast Harbour’s commercial director, said the profile of the cruise liners coming to the city was continuing to diversify. This year will see both large operators and also boutique vessels dock at the harbour, he added.

According to Cruise Belfast, the organisation that markets the city to the industry, more than half of the ships that will call in Belfast will bring an average 1,000 visitors with them.

The largest ship to dock this year will be the Royal Princess, at 330m long, which alone will bring more than 61,000 passengers to Belfast during her 12 stops.