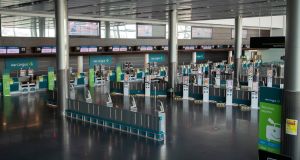 An empty Aer Lingus check-in area at Terminal 2 in Dublin Airport recently. The Irish airline is planning job cuts to counter the impact of Covid-19 on its business. Photograph: Colin Keegan, Collins Dublin

Aer Lingus will hold talks with trade unions on Tuesday on the airline’s plans to cut what some speculate could be around 900 jobs.

The airline postponed a conference call with representatives of unions Fórsa, Siptu, Connect and Unite last week to give further details on plans to reduce its 4,500-strong workforce as its business shrinks in the face of Covid-19.

Aer Lingus has re-scheduled the meeting for Tuesday. The company has told unions that it expects its business next year to be 20 per cent smaller than in 2019, and wants to cut job numbers in line with this.

That led to speculation that the Irish carrier would seek 900 redundancies. However, the company has not said how many jobs it intends cutting. The unions have told the company that any redundancies must be voluntary.

British Airways, part of International Consolidated Airlines’ Group along with Aer Lingus, has begun talsk with its unions on plans for around 12,000 redundancies.