Airline was expected to give further details on job cuts 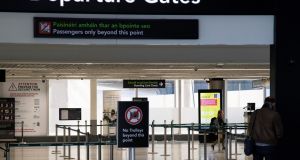 There is speculation that Aer Lingus may seek to cut up to 900 jobs from its 4,500-strong workforce

Aer Lingus has postponed a meeting with unions in which the airline was expected to provide more details on proposed redundancies.

There is speculation that the Irish carrier may seek to cut 900 jobs from its 4,500-strong workforce as its business is likely to shrink following the Covid-19 crisis that has grounded more than 90 per cent of its passenger fleet.

The company postponed a meeting with unions scheduled for Friday, May 9th, in which it was to discuss in further detail the plans to cut jobs.

Aer Lingus has not said how many redundancies it is likely to seek. Management told unions it expected its business next year would be 20 per cent smaller than in 2019, and that job cuts would reflect that.

Unions have told the company that any redundancies would have to be voluntary. Four organisations – Fórsa, Siptu, Connect and Unite – represent most of the airline’s staff.