Passenger traffic at Shannon Airport declined 8% last year, and it is now impacted by Covid-19 lockdown 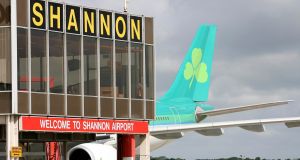 Last year Shannon Airport saw its first annual falloff in numbers since 2013, with 150,000 fewer travellers than in 2018. Photograph: Arthur Ellis/Press22

Post-tax profits at Shannon Group, which operates Shannon Airport, rose 43 per cent to €21.6 million last year despite the first reduction in passenger numbers at the airport in six years.

Its annual report shows turnover at the group, an umbrella organisation for separate companies including Shannon Airport Authority, Shannon Heritage, Shannon Commercial Properties and the International Aviation Services Centre, rose by 1.7 per cent to €79.1 million.

The increase in profit was largely due to the impact of an exceptional charge of €5.8 million relating to a group-wide voluntary severance scheme in 2018.

Shannon Group chair Rose Hynes said the figures represented “a positive result in what was a challenging year for aviation and tourism in the regions”.

However, she acknowledged an 8 per cent decline in passenger numbers to 1.71 million in 2019 was “disappointing.” It was the first annual falloff in numbers at Shannon since 2013, with 150,000 fewer travellers than in 2018.

Ms Hynes attributed the decrease largely to the global grounding of the Boeing 737 Max jet on safety grounds.

She said Shannon Group had redoubled its efforts to secure additional services, and had announced three new routes to Paris Charles de Gaulle, Vienna and Barcelona at the end of the year, although their launch has been postponed due to coronavirus .

On the impact of the Covid-19 crisis, Ms Hynes said: “We are determined to reconnect our airport and the west of Ireland to global destinations as soon as possible.”

She said the group also has ambitious plans for the next phase of development at the Shannon Free Zone, to include the construction of new advanced technology manufacturing units and an office block at the main entrance to the zone.

Shannon Group’s chief executive Mary Considine described 2019 as “a turbulent year for the aviation sector”, and said the grounding of Boeing 737 Max jets had resulted in the loss of 13 transatlantic services with Norwegian and Canada Air.

She said investment in the group’s property portfolio had reaped dividends, with occupancy rates now at 98 per cent in the Shannon Free Zone.

The annual report shows that visitor numbers at attractions operated by Shannon Heritage, which include Bunratty Castle and Folk Park, St John’s Castle in Limerick, Malahide Castle and the GPO Witness History Centre in Dublin, rose by 4 per cent to 963,000.