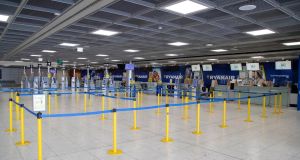 There has been a depressing outbreak of schadenfreude among environmentalists in particular at the perilous state of the aviation sector due to the Covid-19 crisis.

Flying has long since been in their crosshairs due to the carbon emitted by mass air travel, which before the virus swept in accounted for more than 2 per cent of the world’s emissions, or closer to 3 per cent in Europe.

With fleets grounded by lockdowns, some environmentalists’ dreams have come true. But while flying hasn’t been that great for the planet, it is good for us.

Crisis or no crisis, the Green Party would dearly love to crimp the airline industry even further with an aviation tax were it in power. It should be resisted for now because of the damage this would cause to Irish economic and social interests at a time when they must be paramount, in the short term at least.

Similarly, many continental governments are persisting with their demand for a European Union-wide aviation fuel tax, including the Dutch and the Germans. Of course they are. Unlike Ireland, which is surrounded on all sides by water, our northern European moral watchdogs have extensive rail links with the rest of the continent and so proportionally would be far less affected then us.

But the throbbing beat of the mood music remains that we must make flying more expensive in the long term so that the plebs can’t afford to do it as much.

One prominent Irish academic even sniffed recently that after Covid-19 there must be no return to “the €10 flight”, even though the ubiquity of flights that cheap is a middle-class urban myth. It is as if remaking flying as a luxury pursuit that is the preserve only of the wealthy would be a good thing. It would not.

While ostensibly motivated by a genuine desire to make the world a better place, such trite attitudes betray a callousness towards the immediate predicaments of 265,000 people in the Republic whose livelihoods depend on tourism. Less air travel would mean fewer tourists, and a stunted economic recovery. Hence, there would be less chance of a return to self-sufficiency for so many families.

What about those people? What they should they do in the meantime while we wait for scientists and engineers to magic up emissions-free aircraft, the unicorns of aviation? Green campaigners rarely seem willing to answer that question. Perhaps they don’t care. Let the people eat carrot cake?

This is not meant as some paean to climate-change denial. Aviation’s impact on the environment may be exaggerated by green campaigners . You could ban all flying tomorrow and the world would still emit 97.5 per cent of the carbon that it was before. But its effects are, undeniably, growing rapidly and the sector will soon have to address that through technological and other innovations.

Just don’t expect the full solution right at this exact moment, when the entire industry is striving not to go bust.

The debate about aviation and climate change has become ridiculously one-sided. It is too focused on the non-financial costs of air travel, such as its carbon emissions, and it almost never touches any more on the benefits.

We should remind ourselves of how our easy access to air travel has enriched our lives before we succumb to siren calls to make affordable flying history. The Covid-19 crisis has given many of us a glimpse of how dull the world would be if we went back to the future and hiked up the costs unduly.

Millennials and members of Generation Z will never fully appreciate this, but before pioneering companies such as Ryanair and, latterly, Aer Lingus opened up air travel to Ireland’s masses, it used to cost a fortnight’s wages just to get to Britain. Back then, flying was quite literally only for the better off in our society.

Air travel hasn’t just made it easier for business people to conduct cross-border commerce and for people to visit their friends and families abroad. It has also expanded our minds. Many of us have had the privilege of experiencing different cultures that might otherwise have been far less familiar to us.

I suspect that many of our younger, bolshier environmentalists take this exposure to new cultures for granted. But if our Zoom-infused lockdown experiences have taught us anything, it is that there is no substitute for real human contact. How joyous it is to have meaningful contact with people in cultures and countries far away from our own. Coronavirus has stolen that from us for now.

There can be a snobbery to certain green campaigners, who would have you believe that most low-cost flying is simply to facilitate mindless, culture-less sun holidays. They deride it as the fast food of travel. That is unfair. Most foreign travel ultimately conveys some benefit on the traveller via changed attitudes.

I often wonder if some of the sweeping social change we have witnessed in Ireland in recent years would have been so emphatic if we were a people who could rarely afford to fly from this windy rock of ours, if we rarely met anyone else.

Willie Walsh, the chief executive of IAG, the owner of Aer Lingus, this week predicted that it would take at least three years for the industry to recover from the impact of the coronavirus lockdowns.

It may take longer if we pursue measures such as leaving middle seats free for social distancing, or the imposition of well-intentioned but ill-timed taxes.

Some of us would give our right arms to be checking in right now for a flight abroad, for a change of scenery. We miss air travel because it is good for us. Let’s not kill it off altogether.