Group expects capacity to be down 95% in second quarter 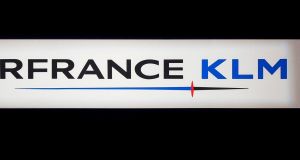 Air France-KLM predicted “significantly negative” earnings over the full year and “a significantly higher current operating income loss in the second quarter than in the first quarter 2020”. Photograph: AFP via Getty

Air France-KLM expects its capacity to be almost wiped out in the second quarter, when it forecasts it will burn through €400 million in cash a month as the coronavirus pandemic hobbles the global airline industry.

The French-Dutch airline expects to spend millions of euros in the April-to-June period despite cost-cutting measures such as the extensive use of government partial unemployment schemes that is saving it €350 million a month.

The group, which was formed by the merger of Air France and KLM of the Netherlands in 2004, expects capacity to be down 95 per cent in the second quarter and 80 per cent in the third, compared with a year earlier. It said it did not see demand recovering “to pre-crisis levels before several years”.

Air France-KLM reported its operating loss in the first three months of the year, when only two weeks showed the effects of the coronavirus lockdown, increased to €815 million, from €515 million a year earlier.

In the first quarter, revenue fell 15.5 per cent over the same period last year to €5 billion while the group’s net loss increased from €324 million to €1.8 billion, driven in part by a fuel hedging loss of €455 million.

The entire airline sector is struggling as lockdowns push down revenues while costs remain high. As job cuts loom, companies have gone to governments for help.

Air France-KLM confirmed last month that it had won a €7 billion loan package from the French government to help it through the crisis while the Dutch government had pledged between €2 billion and €4 billion.

Air France-KLM predicted “significantly negative” earnings over the full year and “a significantly higher current operating income loss in the second quarter than in the first quarter 2020”.

Ben Smith, chief executive, is to present a “new transformation plan” for the group this summer.

The French government has linked its help to cutting emissions, with domestic flights on the chopping board where trains are an alternative option.

However, as Daniel Roeska at Bernstein pointed out, discussion of “environmental measures and other operational restrictions being proposed and discussed by politicians, and how the group might need to adjust to adapt” were “conspicuous by its absence” in the first quarter. – Copyright The Financial Times Limited 2020