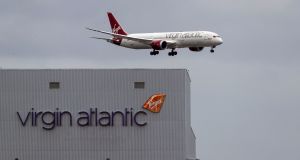 A Virgin Atlantic aircraft landing at Heathrow airport in England. The airline plans to cut 3,150 jobs and move its London Gatwick operations to the bigger Heathrow. Photograph: Steve Parsons/PA Wire

British airline Virgin Atlantic plans to cut 3,150 jobs and move its London Gatwick operations to the bigger Heathrow airport, it said on Tuesday, as it counts the cost of the Covid-19 pandemic.

In the US, United Airlines Holdings, which operates flights to Ireland, will cut at least 30 per cent of its managerial and administrative jobs when government restrictions lift in October, bracing for a prolonged travel slump in the age of Covid-19.

In Australia, meanwhile, Qantas Airways warned public appetite to fly overseas could take years to return as the airline borrowed yet more funds to weather aviation’s biggest ever crisis. The Australian carrier raised an additional A$550 million (€327m) to ride out a near-halt in passenger revenue because of the coronavirus.

“It will be some time before total demand reaches pre-crisis levels,” Qantas’s Irish chief executive Alan Joyce said in a statement. “With the possible exception of New Zealand, international travel demand could take years to return to what it was.”

In addition to cutting the roughly 3,500 positions, United will require that management and administrative employees take 20 days off without pay between May 16th and September 30th to help pare costs, Kate Gebo, executive vice president of human resources, said in an internal memo Monday.

Employees in “non-operational” roles will begin working a four-day week, and cash severance payments will end for managers who are laid off.

The cutbacks are the latest indication that there will be mass job losses in the US airline industry when the federal government’s $25 billion in payroll support runs out at the end of September.

The coronavirus outbreak has prompted a decline of about 95 per cent in US airline passenger totals, and carriers are preparing for the risk of a protracted global recession that would further sap demand for flights.

United’s disclosure to office staff came two days after the airline notified roughly 4,500 pilots that it will displace them by shifting aircraft around its network and consolidating Boeing’s 787 Dreamliner and 777 jets at certain hubs, while flying only 767-300s and not the larger 767-400.

The redundancy plans at Virgin Atlantic, which follow a similar announcement from British Airways last week, intensified calls from unions and opposition politicians for support from the government for the aviation sector.

“We have weathered many storms since our first flight 36 years ago, but none has been as devastating as Covid-19...now is the time for further action to reduce our costs, preserve cash and to protect as many jobs as possible,” Virgin Atlantic chief executive Shai Weiss said in a statement.

“It is crucial that we return to profitability in 2021. This will mean taking steps to reshape and resize Virgin Atlantic in line with demand.”

The airline said it would move its flying programme at Gatwick to the city’s bigger Heathrow airport, but intended to keep its slots at Gatwick to allow it to return if customer demand rebounded.

British Airways has also suspended operations at Gatwick, and has told pilots there is no certainty over when those services might return.

Norwegian Air, which flies transatlantic routes from Gatwick, is preparing to relaunch in a scaled-down version when the coronavirus crisis subsides after reaching a rescue deal with shareholders. – Reuters and Bloomberg