‘Tesla stock price is too high imo,’ writes chief executive at cost of $2bn per word 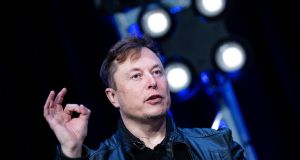 The seven-word tweet was the latest controversial outburst from the outspoken chief executive, whose outpourings on Twitter have landed him in hot water before. An incorrect claim in the middle of 2018 that he was close to a buyout of Tesla led to a complaint from the US department of justice and a settlement that involved Mr Musk agreeing not to issue market-moving tweets in future without first clearing them with his company’s legal department.

Tesla did not immediately confirm whether Mr Musk’s tweet had been given legal clearance, and did not respond to a question about whether the company currently had a general counsel. Tesla lost three general counsels last year, one of them quitting after only two months.

The Tesla boss, who has 33 million followers on Twitter, issued his curt verdict on his company’s shares early in the morning in California on Friday, writing: “Tesla stock price is too high imo.”

Within moments the Tesla share price started sinking, dropping 10 per cent over the course of an hour before recovering slightly. The sharp move comes in what has been a hugely volatile period for Tesla’s shares. They slumped more than 60 per cent after coronavirus hit, but then rebounded by 120 per cent.

In his 2018 settlement with regulators, Mr Musk stepped down as Tesla’s chairman for three years. He also agreed to get pre-approval from Tesla’s lawyers for any “communications relating to the company made in any format, including, but not limited to, posts on social media (eg Twitter)”.

The Twitter-induced stock price drop marks an ironic twist in Mr Musk’s running battle with short-sellers, many of whom have used the service to complain that Tesla’s shares are artificially inflated. The day before, short-seller David Einhorn took to Twitter to question some of the accounting that lay behind the company’s latest strong set of results, extending a personal feud with the Tesla boss that has run for months. – Copyright The Financial Times Limited 2020

7 Dark economic clouds foreshadow the storm yet to come