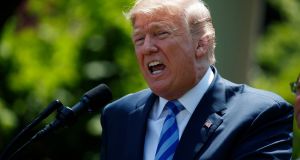 President Donald Trump: his decision on Iran could damage Irish trade just as he looks to U-turn on a previous US blockade of a Chinese firm Photograph: Evan Vucci/AP Photo

But, in a spectacular U-turn, US President Donald Trump has ordered his commerce department to find a way of getting Chinese telecoms group ZTE back into business. ZTE, a contractor to Denis O’Brien’s Digicel group was forced to suspend operations last week in the face of a US blockade on essential supplies.

And sticking with international trade, Minister for Agriculture Michael Creed is in China this week with a host of agrifood companies looking to capitalise on the newly re-opening market for Irish beef as well as opportunities dairy, pigmeat and seafood. Clifford Coonan reports from Beijing.

Back home, Ireland’s construction sector is once again growing quickly after a slowdown due to wintry Storm Emma, according to new data for April.

But high profile BMW dealership Murphy and Gunn is expected to cut its links with the German marque after almost 50 years. Michael McAleer writes that more changes are expected among the carmaker’s 14-strong Irish dealer network.

Niall FitzGerald, the Irishman who has become a leading British business figure, says Ireland has a once in a lifetime opportunity to position itself as the goto place for English language research in the EU but it will need to invest to do so. He spoke to Kevin O’Sullivan.

Fifty years after Richard Nixon declared a “War on Drugs”, Chris Johns despairs at its futility and asks why no government is prepared to consider more effective alternatives – such as decriminalisation and taxing drug sales, a move that might provide much needed funds for health services.

And, in World of Work, Pilita Clark rails against “manswering” – the practice where someone directs their answer in a business conversation to the (generally) male senior figure rather than the woman who asked the question.